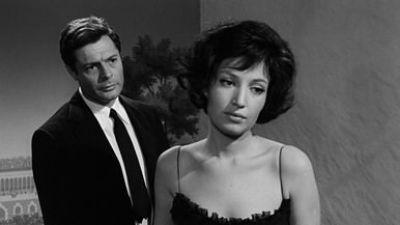 Monica Vitti was born Maria Luisa Ceciarelli in Rome in 1931. Her career as an actress was a long and distinguished one covering four decades. She is, however, best remembered for her collaboration with the Italian director Michelangelo Antonioni (1912-2007). She first encountered Antonioni when asked to dub the voice of an actress for his movie Il Grido (1957). But it was in the four films they made together, L’Avventura (1961), La Notte (1961), L’Eclisse (1962), and later, Il Deserto Rosso (1964) that the actress and director achieved international recognition. During this period, Vitti and Antonioni were also involved in a romantic relationship.

Vitti is the artistic and emotional center of these four landmark Antonioni films. She was the blank canvas and raw material upon which the director applied his colors and shaped the form of his unique vision. She was the illuminating and guiding spirit of his original approach to cinematic storytelling.

Despite the intensity of their personal relationship and professional collaboration, Antonioni presents Vitti, neither as a sex symbol (think Sophia Loren) nor as a force of nature (think Anna Magnani) but as a surrogate for his own interests, perceptions, and obsessive themes. Her cool reserve, aimless walks through empty landscapes, encounters with architecture, and psychological ambivalence, mirror Antonioni’s own desire to deconstruct the existential emptiness and decadence of post-World War II Italy as the country transformed itself from a rural culture to a modern economic power.

L’Avventura, La Notte, and L’Eclisse are often considered a trilogy (called by some “The Trilogy of Alienation”). Their subjects and visual style share a host of related concerns and formal elements. They were ground-breaking and controversial films for their time. In each film, Vitti appears as the embodiment of human mystery, melancholy, variability, anxiety, ambiguity, and adaptability. In her roles as Claudia, Valentina, and Vittoria, Vitti portrays a woman in search of meaning and purpose in life. It is this female point of view and existential struggle with which Antonioni most closely identifies.

Although he had emerged from the earlier neorealist tradition of Italian filmmaking, by the 1960s Antonioni’s visual style was changing. As an actress, Vitti responded to the challenges of Antonioni’s complex formal strategies and provocative psychological conflicts with a vulnerable self-possession. Her characters move through Antonioni’s urban landscapes of alienation with a calm resolve, passing sterile industrial structures — water towers, smokestacks, bridges, construction sites — all the time aware of the eclipse of the old by the new. Through both her gifts and flaws as an actress, Vitti was the perfect vessel through which Antonioni could grapple with his own ambivalence about the modern world and one’s place in it.

Monica Vitti emerged as an actress at the perfect moment in the history of Italian cinema. She was the female personification of Italy’s attempt to understand its new role in the world. This exploration involved confronting difficult and at times unanswerable questions related to such societal issues as class, wealth, sexual politics, and gender equality. On a more intimate level, however, was the investigation of pure human emotion and adaptability in this modern age of anxiety.

There is no doubt that Monica Vitti played a crucial role in inspiring Michelangelo Antonioni to realize his unique vision as a filmmaker. Together they created some of the most memorable and original films in the history of world cinema. Muse, icon, enigma — Monica Vitti was all these things and much more.

View the embedded image gallery online at:
https://www.lagazzettaitaliana.com/history-culture/9926-monica-vitti-1931-2022-muse-icon-enigma#sigProIdd5ee687f81
Tweet
More in this category: « IAMLA and "Woven Lives: Exploring Women's Needlework from the Italian Diaspora" “Letters from Italy:” A Son’s Homage to His Parents’ Love Story and Their Courage »