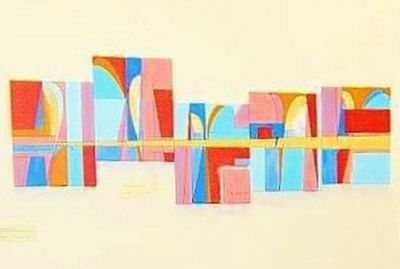 In viewing exhibits at Italian American museums throughout the U.S., visitors can learn about the often-unacknowledged history of Italian immigrants as they struggled to become Italian Americans. From everyday objects to one-of-a-kind handcrafted items, the artifacts on display represent the Italian American journey.

Most of these museums developed their brands through the Italian immigrants who settled in the area, whether specific to a city or a state. The exhibits showcase a culture depicted through personal artifacts and pictures collected from local residents and then displayed to chronicle the regional Italian American lifestyle. Many of these museums also provide exhibit space for local modern-day artists.

Two museums, though – one on the east coast and the other on the west coast – define the culture of Italians and Italian Americans through contemporary art. This perspective seeks to broaden a visitor’s view to an interpretation of the art, instead of seeing the defined limitations of an object.

About 60 miles north of NYC, the historic town of Cold Spring sits along the east side of the Hudson River Highlands. In 1818, it became the home of the West Point Foundry. During the Civil War, the Foundry provided munitions to the U.S. Army through its military post, West Point, located a few miles south on the west bank of the Hudson. After the Civil War, the beauty of Cold Spring attracted artists and writers.

With a mission to “to create further recognition of Post-war and Contemporary Italian Art in the United States,” Magazzino Italian Art opened in 2017. The concrete and glass building, constructed for the collections, houses a mixture of artwork crafted of assorted materials from that era; and the name itself, Magazzino, is Italian for warehouse.

The permanent collection, “Arte Povera” translating to “impoverished art” in Italian, “grew out of the radical stance artists were taking in response to their dissatisfaction with the values established by political, industrial and cultural institutions in Italy.” The 76 works of art present “a variety of formal and conceptual approaches in all mediums” in “an environment solely devoted to this generation of Italian artists.”

Past exhibits include the work of Costantino Nivola in “Nivola: Sandscapes,” featuring a selection of approximately 50 works from the early 1950s to the 1970s, including sandcast reliefs, carved concrete sculptures and rarely seen maquettes of his most important architectural commissions. Magazzino’s inaugural exhibit was “Homemade…a testament to the power and resilience of art and its ability to connect us all.”

In addition to the exhibits, “An extensive library and archive of Italian Art provide resources for scholars and students.” Visit the website at www.magazzino.art for more about the exhibits and grounds.

Established in 1978, the mission of Museo Italo Americano is “to research, collect, and display works by Italian and Italian-American artists, and to promote educational programs for the appreciation of Italian art and culture.” Located in the Fort Mason Center on the north coast of San Francisco, the Museo is in the midst of a Capital Campaign to fund a move to double its size. The larger building – less than three miles east in the North Beach district – is about the same distance as its current location from Fisherman’s Wharf, and currently serves as an Annex. The area has “a decidedly Italian American history” and was known as ‘Italy Harbor,’ where Ligurian fishermen moored their feluccas in the latter part of the nineteenth century.”

Museo’s permanent collections include numerous paintings, photographs and “works on paper,” and a collection of saints and allegorical figures that can be viewed on its website. When renovated, the Annex will house the museum and the Historical Archive Collection, “photographs, documents, clothing, household objects, and other articles that the immigrants had either brought from Italy or obtained after arriving here;” all donated from the surrounding Italian American community. Past exhibits highlight the varied perspectives of Italian and Italian American artists though varied forms of artwork.