From Casa Guidi Windows: The Brownings in Florence 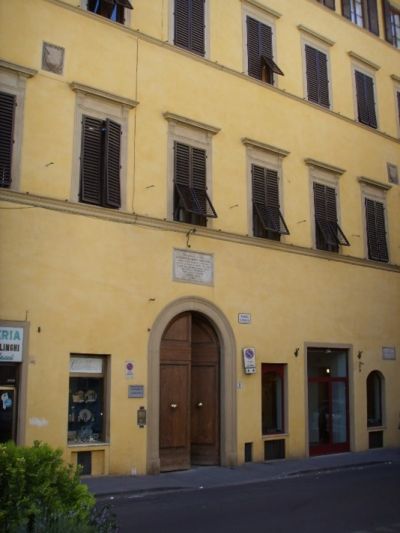 The subject of expatriates in 19th century Italy is a vast one. This is especially true with regards to British and American artists and writers in Florence.

Throughout the 19th century, Italy was a magnet for people of all interests, persuasions, and sensibilities, especially those pursuing artistic and cultural education and enrichment. The earlier 18th century tradition of the Grand Tour remained vital throughout most of the 19th century with Rome continuing to serve as a primary pilgrimage destination. Florence, too, attracted visitors but it was not until the closing decades of the 18th century that the city saw a marked increase in its number of foreign visitors, an influx that only accelerated during the 19th century.

In his Pictures from Italy, published in 1845, Charles Dickens writes: “How much beauty of another kind is here, when, on a fair clear morning, we look, from the summit of a hill, on Florence! See where it lies before us in a sun-lighted valley, bright with the winding Arno, and shut in by swelling hills; its domes, and towers, and palaces, rising from the rich country in a glittering heap, and shining in the sun like gold!”

Earlier, in 1833, the American writer Ralph Waldo Emerson had written: “It is pleasant to see how affectionately all the artists who have resided here a little while speak of getting home to Florence. And I found at once that we live here with more comfort than in Rome or Naples. Good streets, industrious population, spacious, well-furnished lodgings, elegant and cheap cafes. The Cathedral, the Campanile, the splendid galleries and no beggars, make this city the favorite of strangers.”

One way to appreciate the character of 19th century Florence and its relationship to expatriate colonies is to begin in the middle years of the century from 1865 to 1870. During this period, Florence was Italy’s capital. These were five crucial years in the city’s development, years during which it reassessed its relationship to its illustrious past and charted a course for the future. This was the period of the most extensive renovation to the city’s historic center, especially evident in the Old Market and Jewish quarter that gave way to what is today the urban space of the Piazza della Repubblica.

The earlier decades of the century had witnessed the final battles and political maneuverings of the Italian Risorgimento. Many of the British and American expatriates who settled in Florence at that time were caught up in the revolutionary fervor and desire for freedom that was a hallmark of the Florentine scene.

Among the most notable expatriates in those years were the English poets Robert Browning (1812-1889) and Elizabeth Barrett Browning (1806–61). In 1847, the newlyweds took up residence in an eight-room apartment at No. 8 Piazza San Felice near the Palazzo Pitti. The original 15th century palazzo was built for the Ridolfi family and consisted of two houses. In 1618, Count Camillo Guidi, Secretary of State for the Medici, bought the building from Lorenzo Ridolfi. The two houses were combined and refurbished in the late 18th century. In the 1840s, the Guidi family subdivided the state rooms on the piano nobile into two apartments. The Brownings leased one of these apartments and remained there for the entire span of their married life until Barrett Browning’s death in June 1861. (1)

Elizabeth Barrett Browning described Florence in one of her letters as: “The most beautiful of the cities devised by man.” In another letter from June 1854 she writes: “I love Florence – the place looks exquisitely beautiful in its garden ground of vineyards and olive trees, sung round by the nightingales day and night…If you take one thing with another, there is no place in the world like Florence, I am persuaded, for a place to live in – cheap, tranquil, cheerful, beautiful, within the limits of civilization yet out of the crush of it…”

It was from the windows of the Casa Guidi that the Brownings witnessed the events of the early Risorgimento. It was also during their life there that Barrett Browning produced some of her finest work, including Casa Guidi Windows (1851) and the epic poem Aurora Leigh (1856). Casa Guidi Windows is a two-part poem begun on Sept. 12, 1847, her first wedding anniversary and the end of her first year in Italy with Robert Browning. Part One begins with a commentary about the Italian struggle to end Austrian domination. Part Two, written about three years later, expresses her concern that the Risorgimento will be a painful process and its success uncertain.

her window: “I heard last night a little child go singing ‘neath Casa Guidi windows, by the church, O bella libertà, O bella!” The verses that follow project the future of Italy as one that will be founded upon freedom and enlightenment. They express a hope for the political regeneration of the country.

If Part One is a public affirmation of the Florentines’ desire for independence voiced from the streets by a child, Part Two reflects Barrett Browning’s hope for her personal rebirth through her marriage to Robert Browning and her courageous escape from the restrictive life she had been living in London. This personal symbolism coincides with Barrett Browning’s pregnancy at the age of 42 and the birth of her son, Robert, known as Pen, on March 9, 1849. Italy’s fight for independence and Barrett Browning’s own struggle for control of her life seem conflated by the end of the long poem. It is no accident then, that the poem concludes with the image of another child – this time her sleeping son:

"The sun strikes, through the windows, up the floor:
Stand out in it, my own young Florentine,
Not two years old, and let me see thee more!
It grows along they amber curls, to shine
Brighter than elsewhere."

(1)Elizabeth Barrett Browning is buried in a white marble tomb, designed by Frederic, Lord Leighton, in the Protestant English Cemetery of Florence. Her dog Flush is buried in the basement of the Casa Guidi. Robert Browning died on Dec. 12, 1889, in Venice. He was 77-years-old. He was to have been buried alongside his wife in Florence, but the cemetery had been closed. On Dec. 31, 1889, Browning’s body was conveyed to Westminster Abbey and interred in Poets’ Corner near the monument to Geoffrey Chaucer.