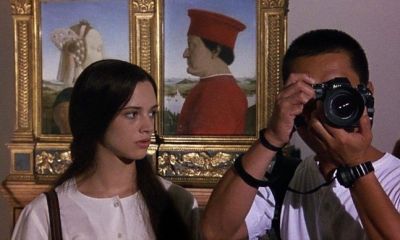 Italia! oh Italia! thou who hast

The fatal gift of beauty…

In 1817, the French novelist Marie-Henri Beyle (1783-1842), better known by his pen name Stendhal, set out on an exhaustive tour of Italy. Stendhal’s personal journey across the Italian peninsula was far from a frivolous or cursory tourist excursion. His itinerary ranged from Lombardy in the north, through the great cities of central Italy, deep into the southern locales of Calabria. Cities visited included a mix of popular Italian destinations such as Milan, Florence, Rome, and Naples with additional excursions to less visited stops including Bologna, Siena, Salerno, Paestum, and Catanzaro. For the French writer, this direct encounter with Italian art and culture represented the deepest and most profound experience in his life. In that same year of 1817, Stendhal published his recollections and impressions of Italy under the title Rome, Naples, and Florence. (1)

In Milan, Stendhal became lost in admiration for the city’s great Gothic cathedral, writing: “Bathed in the silver radiance of moonlight, Milan Cathedral is a thing of such ravishing beauty that all the world cannot contain its equal.” Nearing Florence he writes: “…as I descended upon Florence from the high ridges of the Apennine, my heart was leaping wildly within me. What utterly childish excitement! …my gaze plunged downward into the heart of the plain, and there, in the far distance…I could distinguish the somber pile of Santa Maria del Fiore with its famous Dome, the masterpiece of Brunelleschi. ‘Behold the home of Dante, of Michelangelo, of Leonardo da Vinci, I mused within my heart.’”

Among his first stops in Florence was the Basilica of Santa Croce, the resting places for so many illustrious Italians. (2) Walking down the right-side aisle towards the altar, Stendhal passed the tombs of Michelangelo, Machiavelli, and Vittorio Alfieri. Finally, he approached the side chapel in the northeast corner of the church: the Niccolini Chapel, (1579-1661), designed by Giovanni Antonio Dosio (1533-1611) and containing oil paintings by Alessandro Allori (1535-1607) and his son Cristofano, ceiling frescos by Il Volterrano (1611-1690), and sculptures by the Flemish sculptor Pietro Francavilla (1548-1615).

It was while viewing this chapel with its complex Baroque program of architecture, painting, and sculpture that Stendhal experiences for the first time the disorienting emotions, agitation, and anxiety that we today call The Stendhal Syndrome. He writes: “I underwent, through the medium of Volterrano’s ‘Sybils,’ the profoundest experience of ecstasy that, as far as I am aware, I ever encountered through the painter’s art. My soul, affected by the very notion of being in Florence, and by the proximity of those great men whose tombs I had just beheld, was already in a state of trance. Absorbed in the contemplation of sublime beauty, I could perceive its very essence close at hand…I had attained to that supreme degree of sensibility where the divine intimations of art merge with the impassioned sensuality of emotion. As I emerged from the porch of Santa Croce, I was seized with a fierce palpitation of the heart…the well-spring of life was dried up within me, and I walked in constant fear of falling to the ground.”

After experiencing this ecstatic moment, Stendhal finds a bench outside in the piazza. He sits down and pulls from his wallet a copy of the poem “Dei Sepolcri” by Ugo Foscolo describing the poem as “the voice of a friend who shared my own emotion.” (3)

Since Stendhal’s time, the concept of “The Stendhal Syndrome” has been used to describe emotional, unsettling, and often life-changing encounters that travelers experience upon visiting Italy and, most especially, Florence. The term was first coined in a clinical sense in 1979 by the Italian psychiatrist Graziella Magherini. Her 1989 book, La sindrome di Stendhal, was based on her 20 years of experience interviewing tourist/patients at Santa Maria Nuova Hospital in Florence, all of whom told tales of becoming faint, confused, or disoriented while visiting the city. (4) Descriptions of the effects of the art that they encountered included heart palpitations, light-headedness, hallucinations, hearing voices, loss of time, and feelings of becoming subsumed into a painting or architectural space.

In Childe Harold’s Pilgrimage, Lord Byron refers to the “fatal beauty” of Italy. While standing on the Bridge of Sighs in Venice he notes, “A palace and a prison on each hand.” The Stendhal Syndrome is part of this duality of Italy – a place of beauty where one can lose oneself and, at times, fall prey to its seductive power. It is seduction at a subconscious level. This theme or its variation has become a common motif in countless portrayals of Italy in modern art, music, literature, and cinema. (5)

In 1996 the Italian director Dario Argento explored the concept in his film The Stendhal Syndrome. Written in homage to the Italian giallo (the popular pulp fiction crime dramas published in Italy known for their yellow covers), the movie stars the director’s daughter, Asia, as detective Anna Manni and opens with Manni strolling the corridors of the Uffizi Gallery. She progressively becomes short of breath, claustrophobic, and disoriented by the disturbing beauty of the artwork on display. She hears a cacophony of different languages spoken by the tourists around her. She observes people taking photographs. These noises and activities blend into sounds that seem to emanate from the paintings themselves. Transfixed before Bruegel’s Landscape with The Fall of Icarus, (a painting not housed in the Uffizi), Manni faints and appears to plunge headfirst into the picture’s ocean depths. It is a fall familiar to all lovers of Italy.