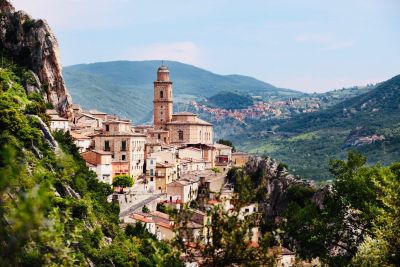 In June of this year, the National Italian American Foundation (NIAF) announced its 2021 Region of Honor: Abruzzo. Each year, NIAF collaborates with a region in Italy by promoting its culture, business and tourism in the U.S., while also traveling to the region to promote cultural exchange. The region will also be prominently honored at the NIAF 46th Anniversary Gala, October 23, 2021 in Washington, D.C.

Chairman Robert E. Carlucci, and members of the Foundation’s executive committee and Board of Directors, will travel to Abruzzo this fall, following two days of meetings in Rome with the NIAF Board and Italian political figures. This annual “Mission to Italy” brings together NIAF’s leaders and business and government leaders to discuss key issues influencing cultural, economic and diplomatic relations between our two nations, in Abruzzo. While visiting the 2021 Region of Honor, NIAF leadership will explore the region’s notable historic sites and meet with the President of the Region of Abruzzo, the Hon. Marco Marsilio, as well as with regional business leaders.

“Abruzzo offers an authentic Italian experience with its wonderful natural landscapes, centuries-old villages, delicious food and wine, miles of Adriatic coastline and rugged mountainous scenery,” said NIAF Chairman Robert E. Carlucci. “I am looking forward to visiting Abruzzo because it is a region that many Italian Americans trace their Italian ancestry from, including myself. My father’s family emigrated to the U.S. from Abruzzo.”

Situated between Lazio, Marche and Molise, Abruzzo boasts beautiful Adriatic beaches, medieval towns full of history, ski slopes on the Apennine Mountain range, and plenty of stunning nature. A third of the region consists of national parks, making it Italy’s most rural region. Abruzzo’s indigenous wildlife is an Italian treasure, which includes the golden eagle, the Apennine wolf, the antelope-goat-like Chamois and, most famously, the Marsican brown bear (a critically endangered species that can only be found in the Parco Nazionale d’Abruzzo, Lazio e Molise). Its vast natural splendor includes seven picturesque lakes, such as the famous heart-shaped Lake of Scanno. Abruzzo’s national parks and mountain ranges, among them the Gran Sasso (meaning “Big Rock”) and Maiella Massif, which slope all the way down to the coast of the Adriatic, offer an abundance of outdoor activities, including hiking, skiing, mountain biking, climbing and paragliding.

With the diverse landscapes of the region, farming and fishing are prominent. Like everywhere in Italy, Abruzzo has a long history of pasta-making along with other rich food and winemaking traditions. For example, Abruzzo is one of the leading suppliers of truffles, 60 percent of Italian truffles come from Abruzzo and Molise. Many precious white truffles sold in Alba, Piemonte, come from Abruzzo, where the climate offers a perfect environment for the growth of several varieties of truffles: the white truffle, black truffle, two types of summer truffles, the winter truffle, and the bianchetto truffle.

NIAF and the region of Abruzzo have worked together in the recent past — in a time of crisis. Abruzzo made international headlines in April of 2009 when a 6.3 magnitude earthquake shook the region and the lives of tens of thousands of its citizens. The NIAF-Abruzzo Relief Fund raised $1.8 million for relief efforts, while a public-private partnership between NIAF and the State Department helped bring 52 displaced University of L’Aquila students to the U.S. to continue their studies at American universities. The Foundation was inspired by the generous financial support the Italian American community donated to provide relief efforts to residents of Abruzzo.

The Foundation looks forward to celebrating the history, culture, and industry of Abruzzo, as well as promoting the region on social media platforms, Ambassador magazine, virtual events, and beyond. Follow our posts on social media with #NIAFeAbruzzo.

Tweet
More in this category: « The Waldensians of Italy Italy’s Fatal Gift of Beauty: The Stendhal Syndrome »