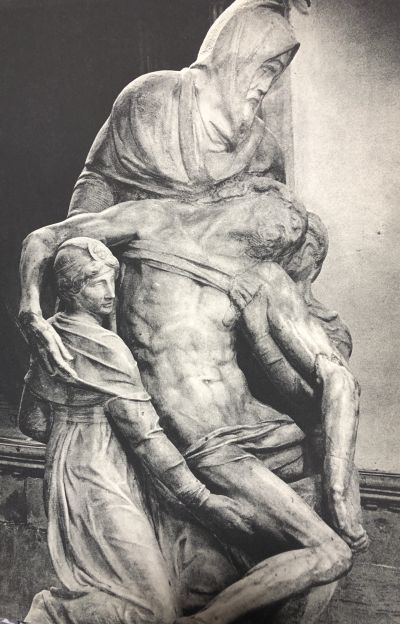 The “Florentine Pieta” or “The Deposition"

Michelangelo Buonarroti, born 1475 in Florence, lauded painter and architect of the Sistine Chapel, poet, and inventor considered himself first and foremost a sculptor and worked in marble until his death in Rome in 1564. He was buried in the Basilica of Santa Croce, also known as the Temple of the Italian Glories, burial place for many illustrious Italians; Michelangelo being the most famous Renaissance artist.

Researching the sculpture simply known as Michelangelo’s “Pieta,” one will discover that he had sculpted two lesser-known pietas presently residing in Florence and Milan.

On completion of La Pieta in St. Peter’s Basilica in Rome, the young Michelangelo, aged 24, became the most famous and sought-after artist, commissioned by powerful families and the papacy. He painted, designed, sculpted, and was quite a prolific writer musing on religion, spirituality, personal tribulations, and romance.

In 1547, at the age of 72, Michelangelo began work on the “Florentine Pieta,” also called the “Pieta Bandini” or “The Deposition.” This non-commissioned sculpture was originally intended for his own tomb, to be placed at the foot of an altar. It differs greatly in composition from Rome’s Pieta of the Madonna holding the deceased Christ across her lap.

The “Florentine Pieta” is a four-person sculpture with the Virgin Mary and Mary Magdalene alongside Nicodemus holding up Christ after taking him down from the cross. The face of Nicodemus is said to be that of Michelangelo. In 1555, dissatisfied with his work, Michelangelo attempted to destroy it with a hammer, stopped by his servant but not before he damaged Christ’s left arm and leg. His two biographers at the time did not agree as to the exact reason for this act but it was accepted that Michelangelo was an uncompromising perfectionist. He never worked on it again.

After his death in 1564, the Pieta was sold to wealthy businessman Francesco Bandini who had it partially repaired by Michelangelo’s pupil, Tiberio Calcagni. For reasons unknown, he did not replace Christ’s left leg. The sculpture changed hands a few times before its final home in 1981 in the Museo dell’Opera del Duomo located behind the Cathedral of Santa Maria del Fiore in Florence.

Michelangelo worked on his third and final pieta, the “Rondanini Pieta,” from 1552 until his death leaving it unfinished. This pieta stood for centuries in the courtyard at the Palazzo Rondanini in Rome. It changed hands many times before the city of Milan purchased it in the 1950’s and is housed in the Castello Sforzesco. Standing 6-feet-2-inches tall, he sculpted the Virgin Mary holding up Christ’s lifeless body in an elongated artistic style much different from the Renaissance style of the Roman “Pieta.” One can sense the bond between mother and Son from the way he positioned their bodies. When seen from behind, Mary and Christ seem to be united as one figure and viewed from the side it appears that Christ is supporting his mother on his back. Michelangelo’s face is now portrayed as Christ, mystically becoming the Lord he loved and often wrote about in his sonnets. Merging his being into the Divine may have been his way of preparing for his own imminent death since age and the rigors of painting the Sistine Chapel had taken its physical toll.

Referring to Michelangelo’s serene portrayal of the face of the Virgin Mary in his pietas in contrast to other artists’ depictions, the art historian Charles de Tolnay writes, “...represents not grief but blessedness and peace…”

From Sept. 22, 2019 to January 5, 2020, the Cleveland Museum of Art presented the exhibition “Michelangelo: Mind of the Master,” a collection of more than two dozen original drawings. These were the working sketches for many of his greatest achievements, displaying his creativity and extraordinary mastery of the human form, a profound influence on the world of art, then and now.

Tweet
More in this category: « At Home With Milano's Italian Restaurant - a Cookbook The Importance of Italian Winemaking »