Superstition or Religion? The Relics and Incorruptibles Tour 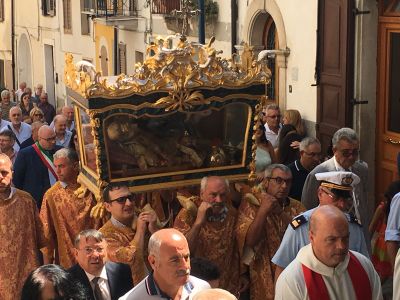 Sarcaphogus of what is believed to be San Felice Martire.

That would seem to be the thought-provoking message of the remains of 4,000 Capuchin monks startlingly displayed for anyone to view (for an entrance fee) in the Crypt of the Capuchin Friars on the Via Veneto in Rome.

One of the most unique and eerie places on the “Relics and Incorruptibles Tour,” as I call it, this ancient Capuchin crypt consists of six chapels decorated with the bones and skulls of monks who died between 1528 and 1870. The Marquis de Sade, a connoisseur of the bizarre, wrote of the crypt, “I have never seen anything more striking.”

This Capuchin crypt is only one of a plethora of macabre destinations in the world for religious pilgrims. The Czech Republic hosts the Brno Ossuary with the bones of almost 50,000 souls and the Paris Catacombs, a labyrinth beneath Paris’ city streets, contain the remains of more than six million.

Even Civitanova del Sannio, my family’s hometown, has its own ossuary, a small cave with the bones of deceased townspeople arranged to form an altar of sorts. Those who do not have enough money to buy more burial space can exhume a relative, if he or she has been dead for at least 50 years, and put their osseous remains in the cave, thereby providing space for the next family member to die. What would happen should someone exhume a grave in Civitanova and find an incorruptible? That would certainly qualify my town for a stop on the “R and I tour.”

The Roman Catholic “incorruptibles,” saints whose bodies have been miraculously preserved after death through divine intervention, are on display in many churches throughout the world for pilgrims to venerate – or be haunted by their images. Their bodies are not mummified but are said to have pliable limbs and soft skin, some supposedly even bleed fresh blood from wounds months to hundreds of years after their deaths.

Saint Cecelia, purported to be the first-known incorrupted saint, whose body supposedly defied decomposition, is said to rest in a tomb in Trastavere, Rome, but is it really incorrupted? Above her tomb is a marble effigy of her martyrdom depicting the position her body was found in, but her body is not visible. In this case, a pilgrim must go on faith that she is, in fact, “incorrupted.”

It appears that the laws of nature do not apply to these incorrupted saints. Or do they? Take the Blessed Anna Maria Taigi, for example, who rests in the church of San Crisogono in Rome. She looks beautifully incorrupt from a distance, but up close there is wax visible on her face forming wrinkles – a skeleton in makeup? Whatever you choose to believe, these “incorruptible” saints warrant a visit and are better than waiting to go to a haunted house on Halloween.

Relics are religious items, usually physical remains or personal effects of saints that are preserved for veneration in memoriam.

In Roman Catholicism there are three classes of relics:

First-class relic – Items directly associated with events of Christ’s life: manger, cross or the physical remains of a saint.

According to Catholic theology, relics, along with religious statues and imagery, are not to be objects of adoration because only God should be worshiped and adored. Yet, Christians travel thousands of miles on a “Relics and Incorruptibles Tour” to pursue their veneration of sacred relics.

If you don’t have the time or money for a pilgrimage, relics will even come to you via the Padre Pio Relic Tour with its next stop in Lafayette, IN in September.

Visiting these surreal yet fascinating displays will affect each person differently because they are transcendental, fraught with   history, mystery and questions. One may find peace, another, anxiety.

I know that on my next visit to Rome, I will be hanging with the Capuchins contemplating their message: “We were what you are; and what we are, you will be.”