Superstition or Religion? Religious Paraphernalia in My Young Life 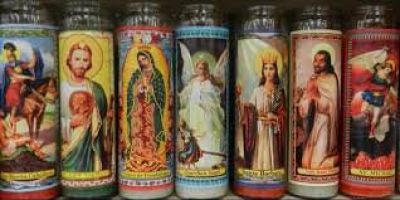 My young life was filled with many different types of religious paraphernalia: from scapulars, candles, novenas, the rosary, and prayer books to candles, holy cards, medals, and more.

A scapular is two small rectangular pieces of cloth or laminated paper with religious images and/or text connected by ribbons. It is worn with one piece placed squarely on the chest and the other on the back, the ribbons draped over the shoulders. A “devotional scapular,” is the lay version of the “monastic scapular,” a long length of cloth suspended both in front and in back from the shoulders, overlaying the habit of monks and nuns in some Christian orders today.

My sisters and I wore our scapular under our grade school uniforms. I suppose my mother thought we needed all the help we could get as a devotional scapular was supposed to serve as a reminder of one’s commitment to live a Christian life. Though I didn’t know its meaning then, mine had an image of Our Lady of Mount Carmel and one of Saint Simon Stock.

Known as the Brown Scapular, the Scapular of Our Lady of Mount Carmel is said to have been given to Saint Simon, a Carmelite, on July 16, 1251, by Mary, Jesus’ mother. The promise of Our Lady, “Whosoever dies in this garment shall not suffer eternal fire,” was revealed in a vision to Pope John XXII in 1322. Despite its validity being questioned throughout history, some still consider the promise to be true, though many wear the scapular simply as devotion to the Blessed Virgin for her intercession and special protection. It is common for children to be invested after their First Holy Communion by a Catholic priest. One of the stringent conditions requisite for gaining the promise of the Brown Scapular is to wear it continually. The Blessed Mother surely was not happy when I stopped wearing it in summer when, I suppose, it got in the way of jumping, running and swimming.

Candles, long used for saintly intercession both at home and in church, continue to be a popular type of religious paraphernalia.

In church, people typically donate money before lighting a votive candle. My mother prefers 24-hour prayer candles beautifully decorated with religious images. These she lights to pray for the dead during Holy Days and to bring “the light of Jesus” into her home.

A novena, from the Latin word “nine,” is a nine-day period of private or public prayer and meditation to obtain special graces or to request special favors or petitions. The Saint Jude Novena, for example, is praying to St. Jude, the patron saint of impossible causes, to intercede on behalf of an urgent request you may have. Novenas began when Jesus ascended into heaven, inspiring the Apostles to pray constantly for nine days. In today’s digital world, one can, with credit card in hand, “feel the power of praying together with thousands of people,” by signing up and joining a novena group online.

A Mass stipend is paying to have a Mass said for someone or for a certain intention. The church’s official teaching is that the graces flowing from the Eucharist are infinite and no one receives any more graces or merit by having a Mass said for them. Some priests will not accept the money. When my sister and I went to the family village in Italy, Civitanova del Sannio, my mother gave us money to give to the priest for a Mass to be said for her brother, which he graciously accepted.

Medals with images of the saints, Christ or the Virgin Mary are used for religious devotion most commonly by Roman Catholics and by Orthodox and Anglican denominations. The wearing of religious medals is a very ancient tradition in the Catholic Church, coming from the pagan practice of wearing amulets, objects believed to have supernatural powers or protection to the wearer. Christians co-opted the pagan practice, adapting it to Christian belief. Catholicstraightanswers.com says “Never should we look upon the wearing of a religious medal as a “charm,” but always as a sacred symbol of the supernatural protection offered directly by our Lord, Blessed Mother, or saint. Supernatural protection? Pagan practice? As a child I wore medals pinned to my undershirts with no idea of their origin or their function.

More recently, I encountered another object of religious paraphernalia that I am sure is quite rare. I bought many to give as gifts when I found them at the dollar store – banks with brightly colored pictures of Jesus on them that said, “JESUS SAVES.” I wish I had saved one for me!

Tweet
More in this category: « “Freedom and democracy incompatible with those who always look for enemies” NIAF On Campus Fellowship Scholarship Announced »