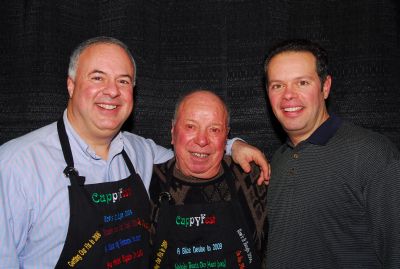 In June we celebrate Father’s Day here in the US. It is a day on which we honor and show appreciation for our fathers, whether they are with us in person or only in our memories. For Joe Fragapane and his family, they remember, honor and celebrate their patriarch Salvatore Fragapane at another time of year during an event called CappyFest.

CappyFest is the name given to the weekend each January when 42 men, some local, some who travel in from around the country, get together in Cleveland, OH to make the Italian cured meat called capicola. Joe Fragapane is the organizer and host of the event and dad, Salvatore, as the founder, holds the illustrious title of CEO (Capicolian Executive Officer) of what they call the “Capicolian Empire.”

Over the weekend, the “Capicolians” turn about 400 pounds of boneless center cut pork loin into 80 “cappies.” The first day is the “CappyPrep” when a smaller group of men prepare the loins for the brining process by trimming and cutting them to size, covering in salt and placing them in bins. Nothing goes to waste, so the trimmings are ground, spiced and made into Italian sausage which is shared by the participants.

Two days later is the main event when the whole group gathers at a large warehouse to create the capicola. An assembly line is set up to process the meat. First, the pork loin is washed thoroughly in red wine. Then it is thickly coated with a paprika and pepper mixture. The last step is placing it in netting and tying it off. The processed and netted capicola are then transported to Joe’s basement wine cellar where they will hang and cure for about 12 weeks.

After that, the 42 “Capicolians” and their friends and family gather to conduct the “draft lottery” when each member gets to select their capicola to take home. Names are drawn at random and the person who gets first choice also gets the coveted “Red Jacket” which they have the privilege of wearing until the next CappyFest.

The origins of CappyFest go back to a cold day in January 2003 when Joe brought his father, Salvatore, down to the basement of his home to discuss plans for a wine cellar. As Joe was talking about grapes and barrels, Salvatore was focusing on the ceiling and interrupting Joe to talk about the cool temperature of the cellar. Joe quickly realized Salvatore was thinking about using the room for something other than making wine.

Salvatore learned the art of making capicola in his paese of Alcara Li Fusi, Sicily, before immigrating to Cleveland in 1955. He had developed a second sense for the right conditions for curing capicola, but never found the ideal space here in Cleveland until that January day in Joe’s basement. Joe had never made capicola before and was unfamiliar with the process, but happily invited his dad to use the basement.

About a week later, Salvatore returned to Joe’s house with eight prepared loins and hung them in the basement. It proved to be a great environment for the process. Joe soon joined Salvatore in making the capicola. Friends visiting the house noticed the meat hanging in the wine cellar and expressed their interest in working with Salvatore, too. More and more men became involved over the next couple of years and, thus, CappyFest and the Capicolian Empire were born.

In January 2019, the group celebrated the 16th annual CappyFest. But Joe almost cancelled it due to the loss of his father in October. Six months before that, Joe also lost the “Chairman” of the Capicolians, Mr. Phillip Sinisgalli, another tremendous and inspiring man. Joe felt it might be too hard to host the event without Salvatore and Phillip by his side. Thought and reflection led Joe to realize that he should carry on with the event to honor these men and the valuable lessons he and all those who participate in CappyFest learned from them.

In helping to create CappyFest, Salvatore Fragapane passed on his knowledge of the tradition of making capicola. But the event is about more than the techniques of making a good capicola. It is about the importance of camaraderie and brotherhood and how it can be fostered by the sharing of good food and wine and through the excitement and satisfaction generated by creating something amazing with others.

On Father’s Day, the Fragapane family, like other families will remember and honor their father, Salvatore. But the true homage to Salvatore’s character and the love and lessons he taught will always be CappyFest.