Superstition or Religion: Praying to Saints 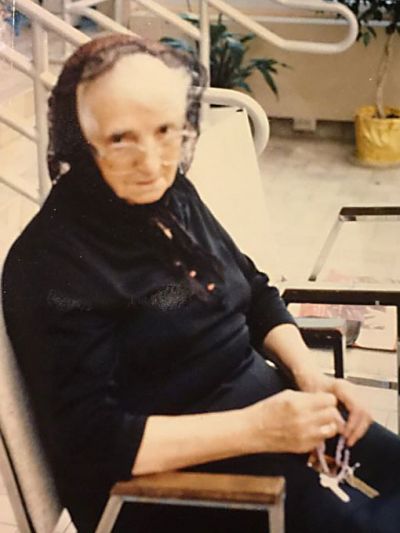 When I was about six-years-old, a strong electrical storm with heavy rains blew in while the entire family was asleep. My mom came to our doors and whisked all of us girls into the basement where she proceeded to pray aloud to Mother Mary in a trembling voice; I suppose to help us survive the storm. In my little girl’s mind I tried to reason out how Mary, dead as she was, would be able to help us and, well, to be honest, I didn’t even think we needed help. I just wondered why I was downstairs while my dad was still asleep upstairs.

Every night we would kneel by our beds and say our prayers: the Our Father, Hail Mary, Glory Be, Angel of God, and an Italian children’s prayer to Mother Mary in dialect, that I will never forget:

In those days, when I prayed, it was mostly memorization with little understanding of the words or meaning behind them. It was just our tradition. As I grew older, I began questioning these traditions, thinking that praying to a saint was just superstitious and an unnecessary deviation so, for me, now, I choose to pray directly to God.

Once, when my mother couldn’t find something, one of my sisters said we should pray to St. Anthony, the patron saint of lost things, to help her find it. Recently, I asked her what it was that mom was looking for that day and after thinking for a moment, she replied, “I am praying to St. Anthony for the lost thought.” Very clever, but that didn’t show me whether praying worked!

St. Dominic, the patron saint of rosaries, can be thanked for the widespread use of the rosary among Catholics today after Mary appeared to him in 1214 to encourage him to spread the use of the rosary. I remember seeing my Nonna Nuccia, a daily church-goer, sitting in a corner holding her rosary and prayer book as she prayed at home when she couldn’t make it to church, though all I remember is the sound of her false teeth clattering as she whispered her prayers aloud!

Many Catholics pray to saints and to Mary to help them in times of need because they are convinced that the saints and Mary intercede for true believers to obtain benefits from God. But what does it mean when they also ask their friends and family to pray for them – that they are also saint-like? In many Protestant churches, the word “saint” refers to any Christian and therefore, they do not pray to saints. Some Christian faiths argue that praying to Mary is also wrong. They feel that there is not enough biblical evidence to give Mary a larger role in the work of salvation and that praying to Mary, or to saints and angels, is idolatry because divine worship should only be given to God.

Fr. Mitch Pacwa, in an article entitled, “The Bible Supports Praying to the Saints,” argues for the saintly detour:

“This is a beautiful image of how the intercession of the saints works. Because the saints are so close to the fire of God’s love and because they stand immediately before him, they can set our prayers on fire with their love and release the power of our prayers.” (www.catholic.com)

Convincingly said… if you believe it works.

Some would argue that in modern-day Catholicism, these unorthodox beliefs are merely cultural practices or traditions. No matter what you call them, they can appear more than odd to most non-Catholics and some Catholics alike.

Among the diverse Christian worlds, controversy abounds; each thinking that their belief is right and just. Idolatry, superstition, cultural tradition, or total devotion to praying? Whatever you believe, it’s between you and God!

Tweet
More in this category: « You're Invited to a Jewish Celebration! - What You Need to Know... Bound for America part two »