A Madonna and Child from 13th Century Lucca 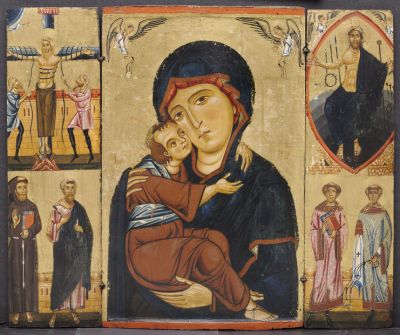 Lesser-known to American visitors to Tuscany is the beautiful and historic town of Lucca located only some 10 miles northeast of Pisa. The more famous cities of Siena and Florence generally attract large numbers of art students and tourists. However, omitting Lucca on a visit to the region of Tuscany would be a mistake. It is less congested in summer and is graceful with its winding streets, historic churches and beautiful gardens. It is protected by a ring of massively-thick Renaissance walls dating to the 16th century. The heyday of Lucca lasted from the 11th-14th centuries, a time when the silk trade brought fortune and, for a time, political power. Lucca lost its independence to neighboring Pisa in 1314. Lucca was one of the most important artistic centers in Tuscany before the rise of Siena and Florence and Berlighiero one of her most prominent artists.

Within the Cleveland Museum of Art is a small painting that links us to this Italian gem of Lucca. It is a small devotional altarpiece, painted during the 1230s and likely intended for a domestic interior or private chapel. It consists of three hinged panels (a triptych), allowing it to be folded and easily transported by its owner. The artist, Berlinghiero, is one of the earliest Italian painters known by name. He was active from about 1228 to about 1238 and headed a large workshop in Lucca with his sons, Barone Berlinghieri, Bonaventura Berlinghieri and Marco Berlinghieri. His actual name is unknown, as he is only known from the inscription "Berlingerius me pinxit" (Berlinghiero painted me) on the crucifix which is the basis of attributing other works to him.

In the center panel of the Cleveland triptych appears the Madonna holding her child. Above are two censing angels. On the left wing is St. Andrew crucified above, while below are Saints Francis and Paul. On the right wing appears Christ with the instruments of his Passion and, just below, Saints Stephen and Lawrence. It is not completely understood how such images were used during the 13th century. However, a patron, the person who commissioned and paid for this work of art, made personal choices as to the specific images that appeared on the triptych. Clearly the Madonna and Child provide the primary focus for devotion, but the ancillary images of saints and Christ’s passion must have resonated deeply with the patron. Indeed he or she must have felt intense personal devotion to these saints. Interestingly, the picture of St. Francis displaying his stigmata must be one of the earliest paintings of this saint. Francis died in 1226 and was canonized in 1228 and veneration to his name spread rapidly. Berlinghiero likely painted this image of Francis within a decade of his canonization.

Our small altarpiece or triptych would probably have been kept closed when not in use. Piety, private devotion and mysticism were on the rise in the Italian city states during the 1200s, spread in part through the teachings of the mendicant orders – the Franciscans, Dominicans and Augustinians. The use of religious images was an important component of an individual experience of faith. This was manifested first and foremost in monasteries and convents where their use was seen as an inducement to prayer and contemplation. From the monastic world, religious images spread rapidly among lay people who could afford to commission them. Our painting by Berlinghiero could have been used in a conventual cell or over a small altar. However, its small scale (about 20 inches in height) would suggest that it was used in a private home by a lay person. When the owner wished to pray, he or she would have opened the triptych, candles may have been lit and the devotee, probably an aristocrat or civic ruler, could visually focus on the images revealed while offering his prayers The style of Berlighiero’s painting is influenced by the new wave of Byzantinism which reached Italy after the capture of Constantinople by the crusaders in 1204. Byzantium exerted a strong influence over medieval Italian painting through the early 1300s as is evidenced here by the long expressive lines and arrangement of the figures.

Though history tells us little about Berlighiero, we would love to know how he trained, how his workshop functioned and who his patrons were. Nevertheless, it is fortunate that a small number of paintings by his hand have survived, that one of these is now preserved in Cleveland and that they indicate the vibrancy and importance of Lucca as an artistic center during the 1200s.

Tweet
More in this category: « Umbria's Valnerina: From Destruction to Dreams Easter in Abruzzo »