Umbria's Valnerina: From Destruction to Dreams 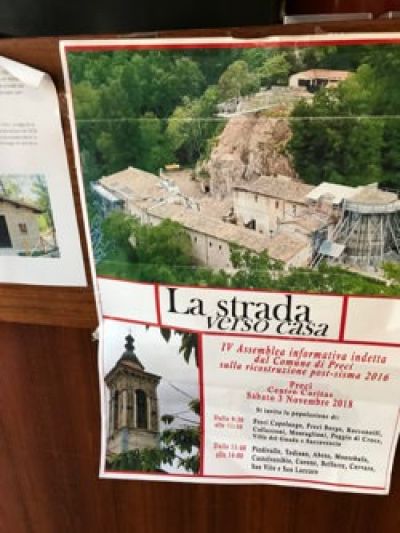 Umbria’s mountainous Valnerina, in the Nera River Valley, unveils splendors at every curve in the road. At the foot of the mountain sits the tiny village of Piedivalle. In this village is a small restaurant, Ristorante Guaita Sant’Eutizio (a Valnerina hidden treasure), currently in a prefabricated condition following the October 2016 earthquake.

Across from this small ristorante, the fenced-off ruins of the 12th-century Benedictine abbey, Sant’Eutizio, stand as a forlorn reminder of the earthquake’s devastation. The bell tower rising proudly above the abbey (near the cemetery bordering the abbey church) collapsed, sliding onto the nave of the abbey church along with a rocky slab of the mountain which had detached. Inside the restaurant, a poster depicts the tragic result.

“The cemetery, too, slid down into the collapsed nave and exists no more,” said the young hostess, Anita. She and Domenico, in the kitchen at the burners, are living the reality, forging ahead with optimism hoping for the earthquake restoration of their former ristorante. From 2012 to 2016, they had served up Umbrian cuisine to guests in a spot attached to the abbey. They worked in another area for over a year after the earthquake and just re-opened in the pre-fab model on April 1, 2018.

Like others with quake-damaged homes, they live in a mustard-yellow pre-fab, too, at the foot of their nearby village, tiny Piedivalle di Preci. The young couple spend little time at home and many hours at La Guaita. In the morning before lunch, Domenico makes all the pastas and gnocchi and other dishes on their tempting menu. After the lunch guests have departed, he bakes all the breads.

On the wall in the restaurant is a quote by Paul Coelho urging the couple and their Valnerina neighbors to forge ahead. The rough English translation is: “The world is in the hands of those who have the courage to dream and to run the risk of living their dreams.”

On your way out, you will notice a handprinted wooden sign out front bearing a whimsical saying. “If you have an appetite and love life, welcome to Domenico and Anita’s.”

The couple has brought to life this saying and the Coelho quote on La Gaita’s wall. They are truly “living their dream” amongst the destruction.

Tweet
More in this category: « On Becoming a Dual Citizen A Madonna and Child from 13th Century Lucca »