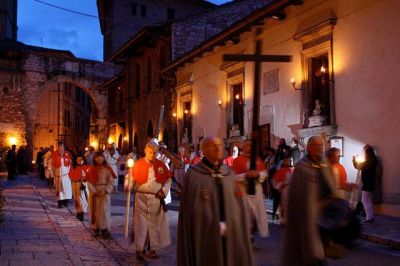 Countless religious customs and innumerable processions in Italy are rooted in medieval street theater. The Holy Thursday and Good Friday traditions in Assisi are living examples. On Holy Thursday night in the 12th-century San Rufino cathedral, the crucified Christ image is detached from His Cross in the ceremony of the scavigliazione (“un-nailing”) and laid on a wine-colored funeral bier which is then covered with a gold-fringed burgundy canopy. From the Middle Ages, crucifixes with removable Cristo Morto images were common and were made specifically for the religious processions. These processions were really a transformation of popular street theater, often acted out in the piazzas and on church thresholds to teach the common people ecclesiastic truths. A living liturgy.

Early on Good Friday morning, Confraternity members in their caped tunics lift the funeral bier bearing the Cristo Morto onto their shoulders to carry the sacred image in solemn procession from the San Rufino cathedral on the eastern end of the town to the Basilica di San Francesco at the western-most tip of the town. Barefoot, hooded figures in white tunics, i penitenti, heads crowned with thorns, precede the Cristo Morto followed by the clergy and the townspeople. The only musical accompaniment will be a single drum, beating a melancholic funeral dirge. All the bells in Assisi are silenced on Holy Thursday and will not ring again until Easter Sunday, when they erupt in a joyous peal.

The morning procession stops at three convents of cloistered Poor Clares (followers of St. Clare of Assisi, the 13th-century female protagonist of the San Francesco movement), so that the nuns can venerate Christ, kissing His feet, the sword wound in His side and placing flowers on the bier. In contemplation and prayer in their convent chapels, the Poor Clares await the arrival of the procession, knowing that the drum’s funeral dirge and the singing of the local people and clergy will announce the arrival of the Cristo Morto.

The Procession concludes at the Lower Basilica of St. Francis where the statue of the Cristo Morto, draped in black netting and now covered with the nuns’ floral tributes, will be placed in front of the altar for popular veneration all day on Good Friday. On Good Friday night, assisiati and visitors will join in the evocative nocturnal Processione del Cristo as the statue of the Sorrowful Mother, her heart pierced with seven swords symbolizing her seven sorrows as she followed her Son on his Via Crucis, is carried out of the Cathedral di San Rufino: la Madre Dolorosa goes in search of her Son.

The statue is carried on the shoulders of Confraternity members in their gray and white habits, their shoulder cloaks embroidered with the confraternity symbol. Barefoot and hooded white-cloaked penitenti, crowned with thorns and dragging heavy wooden crosses, precede the Madre Dolorosa. Religious and civic authorities including Carabinieri in full dress uniform follow la Madre Dolorosa and then the townspeople join in, all singing the Stabat Mater, as the procession winds through the torchlit medieval backstreets to the Basilica di San Francesco. The religious sing in Latin, the people respond in the Italian vulgate.
The Good Friday night time procession concludes when La Madre Dolorosa reunites with her Son at the Basilica di San Francesco. The statues of Cristo Morto and la Madre Dolorosa are then born in slow solemnity through the winding medieval backstreets, back to the Cathedral of San Rufino.

Tweet
More in this category: « OVID: Loves, Myths and Other Stories Nuns on the Run »