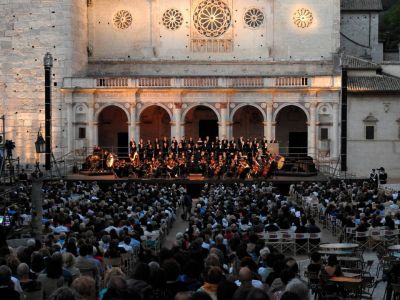 Every summer in Spoleto, Italy, the widely-celebrated Festival dei Due Mondi takes place within June and July. Titled as the Festival of the Two Worlds when translated to English, the Festival dei Due Mondi consists of a wide variety of artistic events. From concerts and operas to dances and discussions, this festival is used to explore those with talent as well as bring forward a new generation of those ready to be discovered.

Originally created to bring European and American cultures together, this festival has been the source of cultural enrichment since 1958. It was originally put together by composer Gian Carlo Menotti and it has been going strong ever since. The Festival dei Due Mondi lasts for about three weeks from the end of June to the beginning of July. As with many festivals and parties taking place during the Italian summer, this is considered a special cultural event within Italy.

Some notorious artists who have attended this festival include actor and filmmaker Al Pacino, dancer and actress Carla Fracci and composer and musician Ralph Farris. The talents of the participants ranges from their singing to their performing to their instrumental gift. Plazas, theaters and more are opened to the public within the town of Spoleto and everyone is welcome to bask in the beauty of art and music. Not only are the performers and artists amazing to witness, but the history of the area itself is something to appreciate, as certain theaters and stages are a few centuries old.

Professionals in dance, theater, movies, and entertainment from all over the globe join together to showcase their various talents. Although this festival only comes once a year, it is sure to impact the minds and hearts of the watching audience for years to come. With 60 years of the Festival dei due Mondi already passed, there are surely many more years to come for this wondrous festival.

This year marks the 61st anniversary of the spectacular event and there is sure to be an eager crowd ready to partake in global culture. The Festival dei Due Mondi begun on June 29 and it will continue through July 15.