The U.S. Italian Community and the Immigration Act of 1924 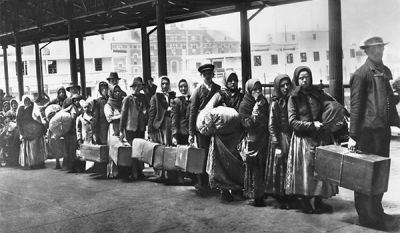 In 1924, Congressman Albert Johnson and Senator David Reed introduced and helped pass an act of Congress that drastically reduced immigration from Southern, Central and Eastern Europe. As one of the targets of the legislation, immigrants from Italy had long been in the crosshairs of anti-immigrant bigotry. With the new law enacted, Johnson and Reed scored a bulls-eye. A brief look at the history of the infamous Act brings to mind that Italians once stood in a similar place as many immigrants from the Middle East do today.

As early as the 1870s, U.S. mining companies had exploited Italians as strikebreakers in the nation’s coalfields. The pitting of native workers against immigrant Italians reinforced Americans’ view that the newcomers were undesirable outsiders. Italians' "foreign" religion, language and habits made them targets of organized bigots and of the Ku Klux Klan. A mob lynched Italians in New Orleans in 1891 and in Tallula, LA in 1899. In Niles, OH, a planned KKK march of thousands on the town’s Catholic and Italian communities resulted in 18 hours of full-blown rioting.

To make matters worse, an extremely small group of Italians were involved in terrorism. In 1900, anarchist Gaetano Bresci, an immigrant settled in the U.S., traveled back to Italy where he assassinated Umberto I, the country’s reigning monarch. In April of 1919, an Italian anarchist group under the leadership of Luigi Galleani sent at least 30 mail bombs to prominent U.S. politicians and judges. On September 16, 1920, a powerful blast on Wall Street killed at least 30 people and injured 143. The crime was never solved, but later investigations pointed to Italian anarchists. In the press and in the eyes of many, “Italian” and “anarchist” became synonymous. Added to the hysteria caused by violent Italian anarchism, successful revolutions in Russia and postwar Germany–along with revolts in Italy– became the talking points politicians used to heap suspicion on Italians as politically subversive. These were indeed very hard years for our community.

What were the provisions of the Immigration Act of 1924? The legislation capped yearly immigration to 2 percent of a nationality’s numbers in the 1890 census. Without even mentioning the word “Italian,” the law severely restricted the flow of new immigrants from Italy. As with many laws that are discriminatory in nature, its creators hid their intent behind mathematical formulas. To base their quota, the formulators carefully avoided using any census year after 1890, when Italians began to enter in larger numbers.

How did the Act negatively impact Italians? Immigration from Italy fell from an average of 216,000 per year in the period from 1905 to 1914, to just over 6,000 in 1924. Behind these cold statistics lay the grim fact that families became separated for decades. Later, WWII would cause a further delay. A special burden fell on those fleeing Mussolini. Rejected by the U.S. low quota set for Italians, the political refugees settled in Argentina. The Immigration Act of 1924 sadly marked non-Nordic immigrants as inferior and unwanted in the country that had previously granted them entry. Predictably, the infamous law saw more Italians, Jews and other targeted foreign nationals leave the U.S. in 1924 than those who entered.

A year after his death, John F. Kennedy’s “A Nation of Immigrants” was updated and republished. The book called for a review of U.S. immigration statutes with the purpose of doing away with the infamous national origins system. Congress responded with the Immigration and Nationality Act of 1968. The quotas were gone.