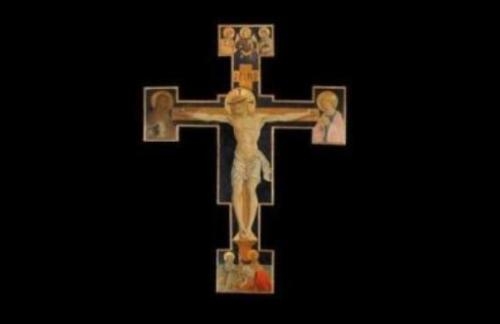 For the "Anno della Cultura Italiana" the Cleveland Museum of Art is doing some big things. Greater Clevelanders are so lucky to have such a prominent art museum filled with some of the world's most celebrated masterpieces. We don't have to travel to New York or Paris to view Van Gogh, Degas or Monet, just to name a few. And the museum continues to offer the best of the best.

Back in 2006, the museum acquired a historically important manuscript missal, which was used during the Liturgy of the Mass back in the 15th century. However, since parts of the museum have been under construction, several galleries have been closed. Now for the first time, since 2006, the missal, which is known as the Caporali Missal, is making its debut in the Cleveland Museum of Art. In fact, "The Caporali Missal: A Masterpiece of Renaissance Illumination" exhibit will not only showcases the missal and its illuminations which are attributed to Perugian artists (and brothers) Bartolomeo and Giapeco Caporali, but is also accompanied by many liturgical objects that perfectly place the missal in ceremonial, cultural and art historical contexts. Many of these artifacts have traveled to the museum just for this exhibit and are on view in the United States for the first time ever. "The exhibition celebrates an important acquisition by the museum, while introducing new scholarship on this sumptuously illuminated missal and on the two Umbrian artists, Bartolomeo and his brother Giapeco Caporali, responsible for its completion," said Stephen N. Fliegel, curator of medieval art.

One artifact in particular that is making its American debut is the painted Crucifix from the Church of San Michele Arcangelo (circa 1460-70). Standing at about 8 feet tall and 5.5 feet wide, this tempera and gold on wood crucifix, accredited to Bartolomeo Caporali, has never been viewed outside of the church, which is located on Isola Maggiore, an island on Lake Trasimeno, in Umbria. I was lucky enough to be able to interview the carrier from the Diocese of Perugia of this Umbrian masterpiece. Dr. Elena Pottini, of the Department of Cultural Assets of the Diocese of Perugia, oversaw the preliminary preparations of the cross before it made its transatlantic voyage, but also the installment of the cross here in Cleveland. Not only did the cross make it to America for the first time, it was also Dr. Pottini's first time stepping foot on American soil.

I was curious to find out how the acquisition of the Caporali Missal was viewed by the Diocese of Perugia, given that in the last few years we have seen many Italian pieces of art in fact return to Italy. "Of course, we're a little sad to see a piece from a little town leave for America; however, it's also true that the missal is in good hands in the Cleveland Museum of Art. The conservation here is naturally, of high value, therefore the asset is well protected. This way, the artifact is for everyone. So whether it's found in Italy or in Cleveland, it's a work of art for all to enjoy. Furthermore, Italy has the big problem of having many artifacts. Therefore, I say it's better to have another museum [outside of Italy], take good care of these art pieces with sufficient funds, instead of keeping it in Italy where the funds lack for art conservation. Otherwise, they would remain closed in storage, which is such a shame," explained Pottini.

The Crucifix, which complements the exhibition, is on rare view. Like I mentioned before it has never left the Church of San Michele Arcangelo, which begs the question--why did they Diocese allow it to leave for America? Dr. Pottini affirmed that "the Director of the Department of Cultural Assets of the Diocese of Perugia absolutely wanted the cross to exhibit in Cleveland, finding it to be the perfect way to represent the Diocese of Perugia and the art of Umbrian painters. The Bishop was happy to lend it as well, giving the notoriety of not only the Cleveland Museum of Art, but also of the curator, Stephen Fliegel. However, the faithful of San Michele Arcangelo were extremely worried about the cross, seeing that it had to cross the Atlantic Ocean and they would no longer have it in their eyesight or in church with them for Mass. This way the Diocese of Perugia is now connected to Cleveland and both cities are enriched with this connection. Also, the Bishop of Perugia was all for the loan, due to the large Italian American community here in Cleveland. He wanted to share a piece of Italy with the Italian Americans of the city."

Transporting the cross wasn't as easy as taking it down, putting it in big storage box and calling UPS for a pick-up. Remember, this is Italy and like many of you may know, nothing is ever easy in Italy, especially what it comes to transporting an 8 foot-tall, 15th century wooden cross. You see, the Church of San Michele Arcangelo isn't exactly situated at the port of the island, no that would have been too perfect. Instead, the church is found at the highest point of the tallest mountain on Isola Maggiore and the only way to get up that mountain is by foot on a very narrow, unpaved, dirt road. Yes, that's right, the fragile, 600 year-old cross had to be carried down the mountain by five men on foot. It was only at the base of the mountain that the cross was then placed in the box and taken by truck to the ferry, where it proceeded on its journey for Cleveland. Luckily after a 3 day trip, the Crucifix arrived at the museum in perfect condition, ready for view.

Although in Cleveland for only several days, Dr. Pottini couldn't have said better things about the city, the people and the museum. She felt at home while strolling the streets of Little Italy and seeing the Italian flag displayed everywhere. For this strong sense of Italian pride, she truly feels that Cleveland is the perfect fit for this exhibition and hopes that there will be many more occasions in the future to exchange Umbrian art with the Italian American community of Cleveland.

A perfect exhibition for this Easter season, "The Caporali Missal: A Masterpiece of Renaissance Illumination" is currently on show through June 17, 2013 at the Cleveland Museum of Art. Be sure to stop by the new restaurant at the museum, Provenance, which will be featuring a Perugian menu for the full duration of the exhibit.