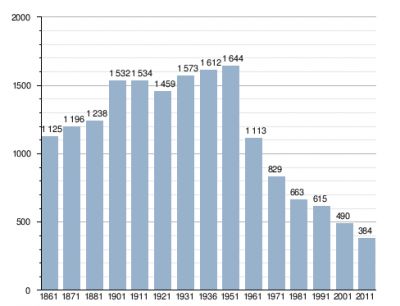 Since the 1870s, Italy has experienced waves of emigration or out migration. Difficult economic conditions have sent Italians all over the world, first to Argentina and Brazil, and then to the U.S. and Canada. After WWII, Italians left for the industrial cities of their own country and the European Union. The impact of the Great Recession of 2007-2009 began the latest exodus. In the face of extended or permanent dislocation, Italian immigrants steadfastly maintain contact with their families and others back home. Nowadays, social media such as WhatsApp, Facebook and Zoom connect people. So do jet airplanes. But in the time of our immigrant ancestors, it was the letter.

Here we have a piece of correspondence from Montelongo, Campobasso, in which Rocco laments that emigration has permanently taken many citizens from the town. His own family is scattered within Italy and abroad. Traditions are dying. We know that recent numbers reveal a continuing deep decline in Montelongo’s population. This is similar to the fate of other small towns in Italy’s countryside, where hundreds have been abandoned. One wonders if Montelongo, at an estimated 311 inhabitants in 2022, will still exist a decade from today.

As I write to you, it’s the Feast of San Giuseppe (Saint Joseph). I’m wondering if you remember the customs of our town (for this feast), though there is a subtle change. This change has to do with the fact that many families, instead of preparing the table, as they always did for the devotion of the great Saint, offer some bread while others still prepare the (traditional) table.

If you came back to town, you would see a big difference. There’s been too much emigration; the town has gotten a great deal smaller as it continues to lose people. Families leave and they hardly ever come back. It’s understandable that when a family sets up home in a (new) place it’s difficult to move again because the children have adapted to the new country that is surely better than here. The parents want to return to their old town, but they give up this dream for love of their children. So, it’s “farewell Montelongo” for that family. But you cannot forget this (feast) day because your husband’s name is Giuseppe and for this reason, I send my good wishes. You’ll say that it’s late but, as always, I am still on time.

The town is totally changed. Every house has a radio. There are already eight or nine televisions. To let you know that there is a radio in every house, you consider that even the poorest family of the past now has a radio. Nowadays the small landowner is in bad economic shape and you might notice that those who do not own a radio are these very people.

I wish you and your family good health so that you can celebrate a joyous Easter. We’re in good health, too.  I hope that my wife and I can enjoy Easter along with my youngest son who’s coming home for the holidays for six or seven days. He’s twenty and he is going to graduate as an elementary school teacher next July or next October, if everything goes well. Our oldest daughter, Maria Teresa, the teacher, married a teacher from Santa Croce and she has two children. She’s now teaching in Montelongo and the festival is the right thing to do for her husband’s family. The oldest son, who lives in Nice (France), wrote us that he’s going to return in May. My second daughter won’t be with us at Holy Easter. She got married in Buffalo. The second son is again in Caracas, in Venezuela, so the holidays are not so happy for us because our dearest ones are far from us. Once again, I’ve given you a summary of my family.

I hope that in the future I’ll see you again as (I did) in the past. Caterina’s daughters told me that you wanted to know if I received one of your letters and I let them know that it arrived. Don’t worry yourself. I’m very busy. Imagine how I have to keep up with the correspondence with my children and then I’m busy with the house and the shop and many other things. I haven’t worked as a tailor since 1935, but I am busy with the land. In the letter you asked me about the address of a good source for mortadella. For this item I depend on an authorized dealer and (so) I don’t have addresses where it’s produced. I’ll ask the salesman, but he usually stays here only for a few minutes and I forgot to ask, but I promise that I will try. I know that mortadella is produced in Bologna and the surrounding area.

Now I don’t know what else I can tell you. I renew my wishes for Easter. Best wishes to your dear relatives from my wife and me.  Dear regards to Joey and to you.