Life Aboard a Steamship 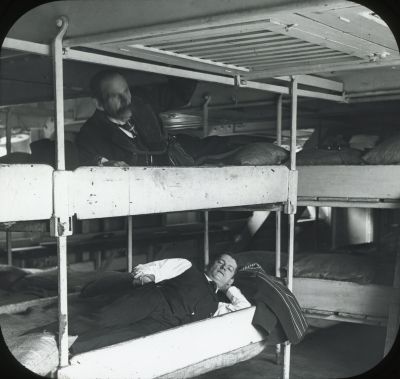 Most of our ancestors sailing the Atlantic spent two weeks aboard a steamship sleeping in noisy, foul and cramped steerage accommodations with up to 200 other passengers. They had no privacy and often resorted to sleeping in their clothes. It was a miserable experience

Over the next few months in this column, we will be exploring our Italian heritage from the perspective of our ancestors’ life experiences. This month’s focus is on what it was like for our ancestors to cross the Atlantic to America. Typically, passengers spent nearly two weeks traveling aboard a steamship from Italy to a U.S. immigration port like New York, Baltimore, Boston, or New Orleans. Trust me - those two weeks were grueling and nothing like the leisurely cruises you would experience today aboard a well-appointed cruise ship!

The Port Experience – “City of Thieves”

Before boarding, the emigrant often spent some time in the port. Much is written about what it was like in the Port of Naples, the largest emigration port in Italy. As far back as the early 1900s, Naples (Napoli) was known as “The City of Thieves.” Our ancestors who had a layover in Naples had to be careful of the napolitano predators who viewed them as easy marks from simple pickpocketing to extortion. In terms of extortion, it took various forms. Perhaps a conman would approach an emigrant and “kindly” offer to help him find a place to stay or eat. The emigrant would be led away to some secluded location and find himself extorted for a “fee” or even robbed! In the port area, there were hundreds of vendors with carts trying to sell the emigrant everything and anything he or she might need for the voyage from clothing, cheaply made luggage and deck chairs, food and drinks, combs, mirrors, soaps, luggage straps, and so forth. These items were often poorly made and overpriced. There was also an abundance of Franciscan friars selling “prayer cards” to help relieve the emigrants’ anxiety and ensure a safe voyage. Emigration was quite a big business in the port cities. I am sure some amount of thievery went on at every port, but Naples had the biggest reputation for such malfeasance.

Prior to boarding, baggage had to be inspected, fumigated and tagged. Some emigrants, knowing they would never return to Italy, brought pieces of family heirloom furniture not understanding that these large items could not be accommodated on the ship with the price of a steerage ticket. This led to an industry of “buyers” who would relieve the emigrants of the burden of their excess baggage at low prices.

Besides the health inspection mentioned last month, emigrants also had to prove they had been vaccinated against smallpox. Those who had no proof or had not been vaccinated were given vaccinations and their boarding pass was annotated. If they somehow managed to get on the ship without this annotation or proof of vaccination, they would face a quarantine at the U.S. immigration station.

At this point, paperwork was checked, passports were examined and details about each passenger were recorded on the passenger list. All these pre-boarding activities could take a few hours when there were 1,500 passengers to board. Once everything was in order and baggage accounted for, then the emigrant was ready to walk the gangplank up to the steamer.

By today’s standards, accommodations in steerage (third class) were miserable. The men and women were separated and all children were assigned to the women’s quarters. Sleeping rooms held up to 200 iron bunk beds which were arranged in rows and had thin jute mattresses that were described as dirty and shabby. During the entire passage most just slept in their clothes. There was no privacy and the nights were restless due to crying babies, the snoring of other travelers and of course the inevitable seasickness. The smell from sickness and unwashed bodies was pervasive.

Water available for daily personal care was unheated seawater. Fresh drinking water was a precious commodity and was provided via dispensing stations that were carefully guarded by the crew. The crew was there to ensure that passengers did not take “too much” or fill other vessels to use the water for personal hygiene rather than drinking. Meals were provided but they, too, were substandard. The steamship company spent about 60 cents per day to feed each passenger, a way to keep costs low and profits high. When a passenger boarded, he was given a rolled blanket that contained a fork, spoon, pint cup, and a round tin pan that was 6 inches wide and 2 inches deep. These utensils would be used for the entire voyage and the passenger was responsible for his own.

For each group of six passengers, a “captain” would be selected from the group. The captain would be given a 2-gallon pan for food and a gallon flask for wine or coffee. When it was mealtime, the captain would get in line and the vessels would be filled by the kitchen crew with macaroni, chunks of beef and potatoes from 25-gallon tin tanks. There were also tanks containing red wine and baskets of bread. The captain was responsible for distributing the food and drink to the others in his group. There was no central sit-down dining experience for steerage passengers and many went back to their bunks to eat. Breakfast was a meager offering of hard, tasteless biscuits and black coffee. It is probable many people lost weight and came to America weaker than when they left their homeland.

Next month we will complete the voyage and look at what it was like to finally arrive in America.