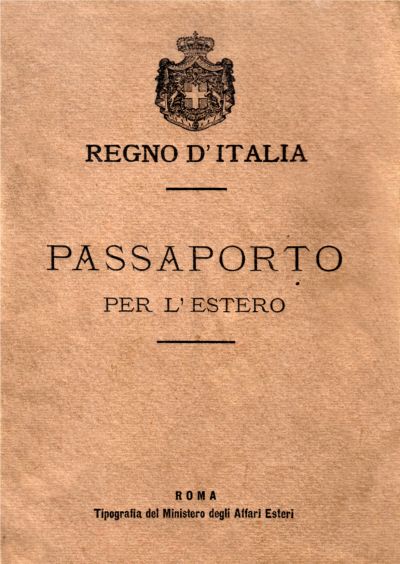 Over the next few months in this column, we will be exploring our Italian heritage from the perspective of our ancestors’ life experiences. This month’s focus is on the process of obtaining an Italian passport and traveling to the port.

Before a steamship ticket could be purchased, Italy required its citizens to have a valid passport. It is interesting to note however that the U.S. did not require incoming Italian immigrants to have a passport until the enactment of the Quota Act of 1924. To start the passport application process, the individual contacted their local mayor (sindaco) who could issue a certificate (nulla osta) stating that there were no objections to the immigrant leaving and effectively clear the applicant for approval at the local level.  With a nulla osta in hand, the immigrant proceeded to the next step which was applying to the provincial prefect official (prefetto) who was the high-ranking public servant in charge of passport issuance.  At this step, the immigrant was required to provide a birth certificate (certificato di nascita), be able to show that he or she was not a criminal and for males to certify that there was no obligation to complete compulsory Italian military service.

The prefetto’s job also entailed being in communication with Rome to ensure awareness of any potential travel issues, for instance, changes in laws or economic concerns that an immigrant might encounter in the process of emigrating to the country of destination. The prefetto had the authority to decide whether to issue a passport or not.  There could be several reasons why an immigrant might be denied a passport. For example, married women required the permission of their husbands to be issued a passport. Imagine a situation where a husband who emigrated to America had abandoned his wife in Italy, she could not even travel to America to look for him! Those with outstanding debts, would also be denied a passport. The prefetto served as a stage gate to help prevent hordes of immigrants crowding a port who may not be eligible for emigration.

The passport fee was 2.40 lire but beginning in 1901, the fee was eliminated. Once all the paperwork was submitted and in order, passports were usually issued quickly and often within 24 hours. Passports were valid for three years.

With passport in hand, the next step was to secure transportation to the port.  Fortunately for our ancestors, by the early 1900s, Italy had an extensive rail system that wended its way vertically and horizontally on the peninsula. For even the smallest of villages, a rail station would be located within reach by foot or an animal-driven cart. Residents of the mountain villages may have needed to start out on foot down the mountain path to another village where a ride on a mule cart could be secured to carry them to the train station. This was just the first part of the trip with a two-week transatlantic journey still awaiting the traveler.

Once the traveler arrived at the port, he or she would usually have to find lodging as it was quite unlikely that the steamship and train schedules aligned. Sometimes the port stay could be several days or even weeks. The Italian government subsidized and supervised “port boarding houses” for travelers. They were not five-star accommodations but did offer a “safer” place to sleep and meals while the immigrant got his or her paperwork in order and the steamer was readied for the journey. I would like to make note here that for many of our ancestors, the trip to the port was likely the very first time any of them had been further than a few miles of their birthplace. When they arrived in a busy port city like Naples, it would have seemed completely foreign to them and yet they were still in their own country.

In port, the immigrant was subjected to a health examination by an Italian doctor who worked for the U.S. Public Health and Marine Hospital Service. The U.S. had strict rules that persons who had fauvus (skin disorder), trachoma (eye disorder), a “loathsome disease,” or any disability that would likely make him or her unable to provide for themselves (the term is a “likely public charge”) would be refused entry. Steamships had an incentive to cooperate with ensuring the health of its passengers. If a passenger were refused entry, the steamship company would be responsible for returning the passenger to Italy. Most immigrants passed the health examinations but there were always exceptions and these poor souls would be refused boarding. One can imagine what a devastating blow that would have been after all the effort and cost in planning the journey. Next month we will continue to journey to America and explore life aboard a steamship.

Tweet
More in this category: « Discovering La Famiglia: Our Ancestors' Lives in Italy: Arranging Passage Life Aboard a Steamship »