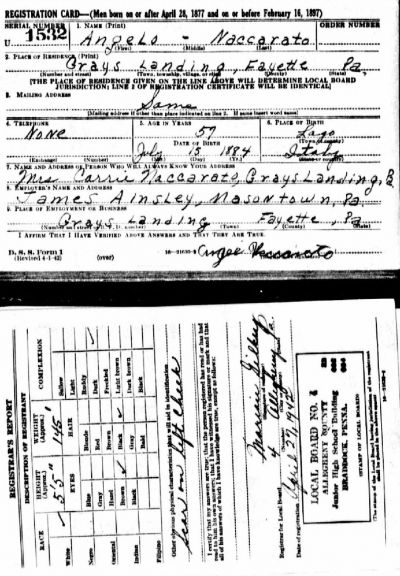 This month, I share how La Gazzetta reader Terry Park of Cleveland and I tracked down his family roots in Calabria. Terry knew that his paternal grandparents came from Italy, but he did not know where nor was he certain of the family’s Italian surname. His family had been using the name “Park” for decades and it certainly did not have enough vowels to be Italian. His grandparents, father and father’s siblings are all deceased. Several cousins and Terry’s late mother had provided some information over the years. Terry believed that the family’s original surname was Naccarato and that there was a connection to a family named Porco. Terry also thought that his family may have come from Northern Italy, specifically Milan, but his uncertainty led him to reach out to me for help.

Terry provided some basic information about his family to start the search. His grandfather was Angelo Park who was born in the 1880s, emigrated to the U.S. before WWI and died in the mid-1960s. Angelo’s wife, Catherine Park, died some years before Angelo in the 1940s. The family lived in Grays Landing, Nicholson Township, Fayette County, PA. Terry also provided the names of his aunts and uncles.

I started searching the Park surname to establish dates of birth for Angelo and Catherine. I was able to locate the family’s 1920 and 1930 census records. In these records, there were some discrepancies likely due to the language barrier between the Park family and the census enumerator. For instance, Catherine’s name was “Susie” in the 1920 census and “Katy” in the 1930 census. I was hoping to find her Italian first name as Catherine is an English name. I found it strange that I could not find a 1940 census record for the Park family.

I was able to locate Catherine and Angelo’s death certificates. Catherine died in 1947, her son, John, provided some information for the certificate that was useful. He reported that her parents were Petro Policchie and Carmine. Angelo died in 1965 but his death record had no information about his parents or the name of his birth town. It did list his wife as Catherine Palachetto. At this point I decided to see if I could find any records under that supposed surname of Naccarato.

I was not expecting to find a lot of records under Naccarato, but I was pleasantly surprised when a search for Angelo Naccarato (using both www.ancestry.com and www.familysearch.org) turned up the 1940 census and a 1942 WWII draft registration. For some reason, the Park family began to use their original Italian surname in the 1940s. We cannot be certain why but there are two possibilities.

First, in the 1940 census, the enumerator reported that Angelo had applied for citizenship. To do this, Angelo would have needed to prove when he came to the U.S. and his Italian name would have been on the passenger list. Perhaps Angelo was making sure his dealings with the government were done under the Naccarato name. The other possibility is that in 1940, the U.S. was suspicious of “enemy aliens” from Italy, Japan and Germany living on U.S. soil and because Angelo and Catherine were not citizens they would have been required to register as “enemy aliens” under the Alien Registration Act. This could have prompted Angelo to resume using his original surname to establish that he was being open about his origins with the U.S. government.

It was Angelo’s 1942 draft registration where he listed his place of birth as Lago, Italy! From there, I was able to locate his 1883 Italian birth record at www.familysearch.org. On this record, there was an annotation written when Angelo married. His bride was Chiara Policicchio of Lago, Italy. Now I also had Catherine’s full Italian name and was able to locate her birth certificate. Her parents were Pietro Policicchio and Carmina Palitano. This aligned with the information that had been listed on her death certificate but with just a few spelling discrepancies. When I started researching for Terry, at first I was concerned that I would never be able to find enough evidence to connect the Park name to the Naccarato name; but, as you can see, sometimes it is a puzzle that requires you to start piece by piece to get the full view.

Why Park? What is the Connection to Porco?

My research could not establish why the family chose the surname Park. However, I did find several connections to the Porco family that Terry mentioned to me. Bruno Porco was one of the witnesses for Catherine’s birth and Angelo’s passenger list shows that he was joining his uncle Giuseppe Porco in Pittsburgh. So, the Porco family from Lago was connected to Angelo and Catherine both here and in Italy.

If you have a question about your Italian roots or need help with an Italian genealogy puzzle, I would love to hear from you. You can send me an email to This email address is being protected from spambots. You need JavaScript enabled to view it..

Tweet
More in this category: « The Italian American Dream Discovering La Famiglia - Getting Started On Your Journey »