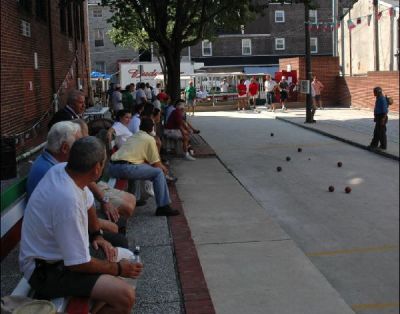 In the mid to late 1800s, many Italian immigrants crossed the Atlantic in search of a better life in America. While Ellis Island welcomed the majority of these immigrants, many landed near Baltimore’s waterfront via President Street Station. They experienced the same prejudices and unfair labor pay and, as in other cities, banded together to form a community to overcome homesickness and language barriers. This new community, a few blocks east of the train station, became Baltimore’s Little Italy.

The new residents created a life reminiscent of villages in Italy. By the early 1900s, Italians occupied almost every house offering trades such as taverns, boarding houses, grocers, shoe repair, tailoring, and more.

Also bringing to America their sturdy Catholic faith, the Italians of Baltimore sought out the nearest Catholic church, St. Vincent de Paul. While the parish sponsored Italian masses, it was not adequate to handle such a large influx of non-English speaking congregants, nor was it conveniently located for the Italian community. The Archdiocese of Baltimore established an all-Italian parish in 1880. St. Leo the Great became, and still is, the nucleus of Baltimore’s Little Italy.

Today, this old, quaint little neighborhood in Baltimore boasts century-old row homes, family-run restaurants, bocce courts, a cultural learning center, a Sons of Italy lodge, and much more. Lovingly nicknamed “The Neighborhood,” Little Italy is a tight-knit Italian community that includes residents of many other ethnic backgrounds as well.

Baltimore’s Little Italy holds many notable treasures. The D’Alesandro House, designated a Baltimore City Landmark in 1987, is the former home of two Baltimore mayors of the same political family – the DD’Alesandros. Speaker of the U.S. House of Representatives Nancy (nee D’Alesandro) Pelosi, daughter of Thomas L.J. D’Alesandro III, grew up here. The Canal Street Malt House, built in 1866 on Central Ave., is named after the canal that once ran down the middle of the street. Long ago, the warehouse supplied malt to Baltimore’s brewing industry.

Many events line the calendar in Little Italy. From the decades-old St. Gabriele and St. Anthony Feasts in summer at St. Leo’s to the Madonnari Arts Fest in the fall to the annual Christmas Tree Lighting, there is something for everyone. Ravioli dinners at the church, bocce tournaments and more bring the community together and keep the old traditions alive in Little Italy Baltimore.