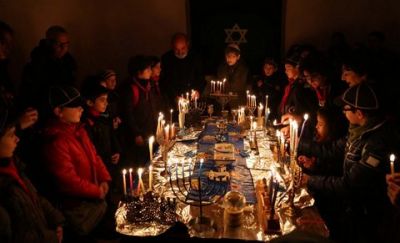 Here in Serrastretta, our tiny village in the Calabrian mountains, our Jewish community is open and welcoming, not only to Jews of all backgrounds, but to our Catholic neighbors as well. Throughout the year, we put into action the words of the late pope, John Paul II, when he said that we Jews are the older brothers and sisters of the Christians. And to that end, Serrastretta’s Jews and Catholics celebrate Chanukah together.

Because Chanukah often falls close to the Christmas holiday (this year the first candle is kindled on Christmas Eve), many, like young Manuele, refer to Chanukah as “Jewish Christmas.” We know that our children mean no disrespect so we take time to share the meaning of what many also believe is a major Jewish holiday. 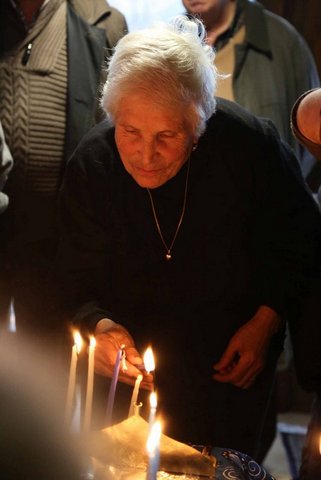 Interestingly, Chanukah is a minor religious celebration; it is Rosh Hashanah, the Jewish New Year and Yom Kippur, the Day of Atonement that take precedence. But that doesn't mean that Chanukah isn't one of the most well-remembered and one of the most fun. Its signature ritual item is the Chanukah menorah with its beautiful lights – eight brightly colored candles that symbolize the miracle that is at the heart of the festival. But, there is a historical perspective to Chanukah that is important, too.

Chanukah is a December festival that commemorates the victory of the Jewish people over those who would attempt to force Jews to give up their Jewish practices and adopt a belief in pagan gods. Catholics read in the Book of Maccabees and Jews read in the Talmud that Judah Maccabee, along with his brothers and other Jewish rebels, waged a guerrilla war against their oppressors. In an upset victory, this tiny band of poorly equipped soldiers regained Jerusalem, cleansed the Temple and brought Jewish belief and practice back to life.

The story goes that when Judah and his men began their clean-up job they found one unopened container of sacred oil – only enough to light the Temple menorah for one day. Optimistically, they lit the menorah, expecting the light to die in a mere 24 hours. But, legend tells us that a miracle happened. The tiny cruse of oil burned brightly for eight days and eight nights, which is why Jews celebrate Chanukah for eight days.

The word, “Chanukah,” derives from the Hebrew meaning of "dedication," as in the dedication of the Temple by the Maccabees. Interestingly, the same Hebrew root also gives us the word, "chinuch," which means "education." Chanukah is the time of the year when we parents educate our children in the traditions of our Jewish heritage and in the indomitable spirit of our ancestors.  Lighting the "chanukiyah" (the correct Hebrew name for the Chanukah menorah) makes these traditions come alive.

Chanukah is a happy, joyous holiday that is celebrated in the synagogue and in the home. It is a lovely Calabria Jewish tradition for each member of the family to have her/his own special menorah. In fact, our family uses "chanukiyot" that we've made and collected over the years. When the lights are kindled, one candle on the first night, two candles on the second, etc., the menorah is placed in front of a window or near a door. This allows for the lights to be visible for all to see, reminding us that Chanukah is truly a holiday celebrating religious freedom and that we Jews are free to be who we are. The ninth branch of the menorah is reserved for a special helping candle, the "shammash," which is used to light all the other candles. Following the candle lighting, special blessings are said and Chanukah melodies fill the air as we thank God for keeping us alive and allowing us to reach this season.

In her book, “Simple Abundance,” Sara Breathnach says that "Many who celebrate Christmas believe that Chanukah is a festival reserved solely for those who practice Judaism." Ms. Breathnach goes on to point out what Rabbi Harold Kushner says about the holiday. Kushner notes that if it weren't for Chanukah "there would have been no Jewish community for Jesus to have been born into a century and a half later. Without Chanukah there would have been no Christmas."

Here in Calabria we will continue a beautiful Chanukah tradition with dozens of “chanukyiot” placed on tables all around the sanctuary. As we do each year, we will invite our Catholic neighbors to join us for the lighting of the Chanukah menorahs. The candle glow will once again remind us of the joy and privilege of celebrating our Jewish traditions. And, in the Chanukah tradition, we dedicate ourselves anew to the spirit of religious freedom that makes Chanukah an important festival for Christians and Jews to share together.

Rabbi Barbara Aiello divides her time between Sarasota, FL and southern Italy where she is director of the Italian Jewish Cultural Center of Calabria (IJCCC), an organization that helps Italians discover their Jewish roots. She is the first woman rabbi and first non-orthodox rabbi in Italy. Prior to her ordination, Rabbi Barbara created The Kids on the Block international puppet program and currently is host of The Radio Rabbi program, 8:30-9:30 a.m. Sundays on AM 930 The Answer in Tampa, Florida and live streamed worldwide.

For more info: www.RabbiBarbara.com or write her at: This email address is being protected from spambots. You need JavaScript enabled to view it..