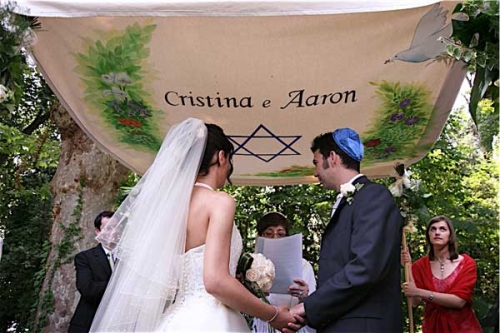 From Lake Como to Tuscany to Ravello on the Almafi Coast, Italy offers magnificent venues for spectacular wedding ceremonies. And, because it is traditional that Jewish weddings are held outdoors, Italy offers Jewish and Jewish Interfaith couples wonderful options for celebrating Jewish traditions.
Of all of the traditions that define the Jewish wedding ceremony, the chuppah, or bridal canopy, (“baldocchino” in Italiano) is one of the most important. A traditional chuppah (dating back to the 1300’s) features open sky above, acknowledging God as Creator who infused marriage with deep spirituality and cosmic significance. The chuppah’s four open sides symbolize the open horizons that the couple will share in married life together.
The canopy, itself, is a symbol of God’s love above the married couple as well as the home that they will now share as husband and wife.
The word chuppah is a Hebrew word, whose origins are found in the Hebrew Bible in Joel Chapter 2 as well as in Psalm 19. The traditional cloth canopy and four supporting poles has come to represent the Jewish home and is reminiscent of the tent of Abraham that was open on all four sides – the world’s first indication of the value of hospitality.
The basic structure of the chuppah can be as decorative or as simple as suits the taste of the bride and groom. Attached to the front poles are often tiny velvet pouches filled with earth from the birthplaces of the bride and groom. A family from Sicily once brought earth from their ancestral mountain home in Taormina. “Nonna” filled a baby sock that was once worn by the bride with rich black earth from their garden and lovingly tied the little sock to the front pole of the bridal chuppah.
During the ceremony, no chairs or other furnishings are placed under the chuppah as a reminder that, more important than possessions, the foundations of the Jewish home are those who live within it.
For all of these reasons, it is traditional for Jewish weddings to be held outdoors with blue sky above, and below, a surrounding panorama of natural creation found in abundance in Bella Italia.
Festooned with flowers, vines, olive branches or ivy, many chuppot take on the personality of the new family about to be created under it. The beautiful chuppot pictured here are examples of how a beautiful Italian setting compliments an ancient Jewish tradition, “sotto la coperta.”
Rabbi Barbara Aiello is Italy’s first and only woman rabbi. She has served her congregation in Calabria for 13 years and officiates throughout Italy at Italian Jewish weddings. Contact her at This email address is being protected from spambots. You need JavaScript enabled to view it. or visit her website at www.RabbiBarbara.Com