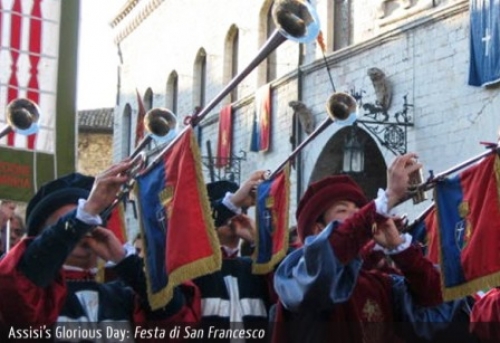 St. Francis' feast day, Oct. 4, is a big day in Assisi and a big day in Italy. In 2005, the Italian Parliament declared this day to be a celebration of peace, brotherhood and dialogue among all peoples of all religions.

Each year, one of the 20 regions of Italy brings the oil which will burn all year in front of his Tomb. This year, the honor goes to the Region of Molise and the Molisani have chosen this slogan for their pilgrimage: "Il Molise ad Assisi: con Francesco, costruttori di pace." ("with Francis, builders of peace.")

On Oct. 4, gold-fringed blue and red banners, the colors of Assisi, will drape the medieval buildings of the main square. At 9 a.m. in front of the 14th century city hall, the trumpeters of Assisi, in blue and red medieval dress, will sound Assisi's anthem, announcing the start of the procession to St. Francis' Tomb in the Basilica di San Francesco, built to house his body.

An array of colorful banners of the cities of Molise will be born in procession by their town policemen, with each Molise city mayor - in a green, red, and white sash - preceding the town banner. The mayor of Assisi, city councilmen, the president of the Region of Umbria and other local officials follow, flanked by urban policemen and the national policemen, carabinieri, in their regal dress uniforms.

Religious people join in, too, and then the local people, Assisani, Molisani and others from all over Italy. On the day after the Festa, Oct. 5, the town of Assisi becomes an open marketplace as the annual street fair, la Fiera di San Francesco, winds its way through the medieval alleyways. Very early in the morning, 150 vendors from all over Italy set up their booths, and most of Assisi is a street market until sunset.

For anyone wishing to experience the Italians while here in Italy, there is no better way than participation in the festivities in honor of their beloved San Francesco.

Tweet
More in this category: « The Top Ten Little Italys in the World I Grandi Matrimoni, Southern Italian Style »