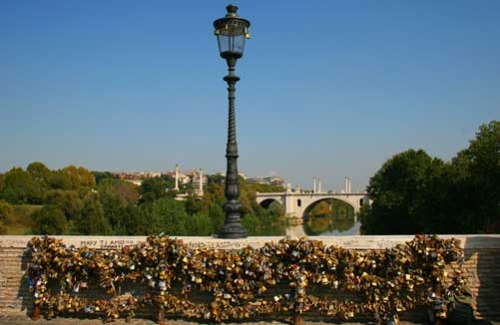 Valentine's Day is synonymous with love and Italians traditionally have been considered to be lovers. Known in Italy as "La Festa Degli Innamorati," Valentine's Day is celebrated only between lovers and sweethearts. Young sweethearts in Italy profess their love for each other all year round with a more recent tradition, attaching padlocks or "lucchetti" to bridges and railings and throwing away the key.

The celebration of Valentine's Day in Italy is actually an imported holiday from the American tradition, just like Halloween which was never originally an Italian tradition but is celebrated today. It is a holiday for romantic couples and children do not exchange Valentine cards as they do in the United States.

Valentine's Day actually has its origin in the Roman Empire as a holiday on February 14 to celebrate the Queen of Roman gods and goddesses. The ancient Romans also considered this queen named Juno to be the goddess Queen of Women and Marriage.

Another legend related to the origin of Valentine's Day refers to St. Valentine who was a priest who defied the Roman emperors' order banning marriage between lovers during wartime and Valentine secretly married them. Once this was discovered, he was put to death on February 14 and later was named a saint by Pope Gelasius.

To celebrate this lovers' holiday Italians give each other flowers, plan romantic dinners and present each other with chocolates, much like in the United States. The renowned Italian chocolate maker, Perugina celebrates this day by making a special edition of the Baci chocolate candies with a shiny red wrapper and a sweet red cherry and liquid center rather than the traditional hazelnut one. These chocolates are always a favorite and inside the foil wrapper there is a "love note" with a romantic phrase.

Florence and Venice are traditionally considered to be two of the most romantic places in Italy but Verona, the city of Romeo and Juliet celebrates Valentine's Day with a four-day celebration of events designated "Verona in Love." In the center of Piazza dei Signori a giant red heart is painted on the street and illuminated heart-shaped lanterns are featured throughout the city center. Free concerts with romantic themes take place in Piazza dei Signori and there is a contest for the most beautiful letter written to Juliet. To attract lovers and sweethearts to spend a weekend in Verona, many of the local hotels offer deals and the restaurants feature specially priced menus.

Locks of Love or Lucchetti dell'Amore

The tradition of locking padlocks to bridges, railings and lamp posts began in Italy a little more than four years ago after the release of the best-selling book "Ho voglio di te" (I want you) by the Italian author Federico Moccia. This was followed by the popular movie with the same name starring Riccardo Scamarcio and Laura Chiatti.

In the story young lovers tie a chain and a padlock around a lamppost on the north side of Rome's ponte Milvio and inscribes their names on it, lock it and throw the key into the Tiber River below. The action suggests that the couple will be together forever.

Throughout Italy I have found these locks usually near bridges but also in more peculiar places such as an overhead sign on the walking tail in the Cinque Terre. Many cities have placed bans on having these locks on bridges citing that it takes away from the beauty and culture of the structure and also adding safety concerns.

Most recently the Rome authorities have issued a decree that the thousands of padlocks on the ponte Milvio must be removed, and in Venice a few months earlier the authorities removed hundred of locks from the Accademia Bridge and announced their intent to do the same on the Rialto Bridge over the Grand Canal.

In Florence police removed more than 5000 locks from the ponte Vecchio where it is a crime to attach these locks today yet they continue to appear anywhere they can be attached. The phenomenon has spread to Turin, Bologna, Palermo and even into other European countries. Love conquers all seems to apply here as it is a losing battle with the Italian authorities.