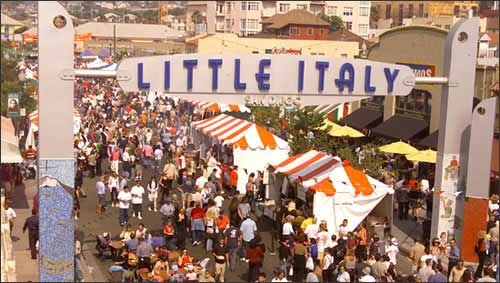 "Go West Young Man' and Ladies" and some Italian immigrants who got a glimpse of the Statue of Liberty and Ellis Island did just that and made their way west. San Francisco appeared to be the location, but the earthquake of 1906 gave many of them second thoughts and they relocated to San Diego, California.

San Diego was ideal! There was a remarkable semblance to their native homes in Naples, Sicily and Genoa. Those Italian ports were great fishing locales and San Diego, with its expansive Pacific Ocean blue, was a reminder of the home towns they left.

A Little Italy was created as Italian families increased and by 1930, 6,000 Italian families dominated India Street near downtown San Diego and close by to the shores of the Pacific and in this neighborhood three of every four Italian families were involved in the fishing and tuna industry.

World War II came along and change happens and Uncle Sam snatched their tuna boats for wartime needs. At war's end, the Italians returned, but their boats were gone and Japan had cut into the fishing marketplace with lower prices. Though means of support changed, the tiny Italian community stood fast thanks to their faith and church - Our Lady of Rosary.

San Diego's Little Italy has enjoyed a rebirth with business and apartment, restaurant and cafe developments. India Street is home to an Italian festival which has mushroomed into the largest one day Italian festa west of the Mississippi. The breezes of the Pacific swirl the aroma of tomato sauce and freshly caught frying fish. The Italian spirit and foods saturate India Street. All of the neighborhood flavors take everyone back to the Italy everyone loves.