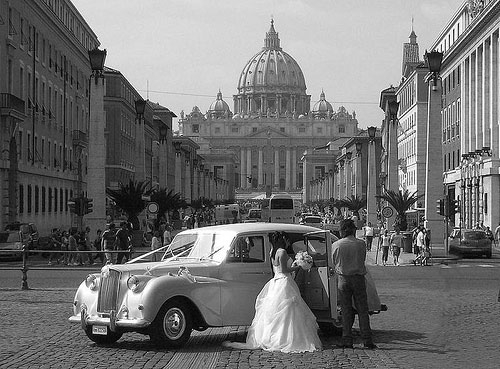 Italians love their traditions and a wedding is one event in which Italian customs are still very much alive. Although these traditions differ from one region to another, many couples follow these today, both in Italy and in the US.

Some of the oldest traditions dating back to the 19th century are no longer followed today, yet are very interesting, particularly in how they differ from region to region. For instance, years ago, in Tuscany, the bride wore a black wedding dress and a white hat, and carried a fan, even in the winter months. Since no unmarried girl was allowed to witness a wedding ceremony, the bride's "bridesmaids" consisted of married women, who accompanied her to the church.

In Sicily, there were two ceremonies, a civil followed by a religious, and the religious was considered to be the more significant. In fact, the groom would not consider himself to be married until after the religious ceremony and the date of that ceremony was considered to be the wedding date. Many times the bride would arrive at the church on horseback, with the ceremony frequently occurring at night, and the way being lit with torches.

Some other customs were common throughout Italy, and although a few may still be followed today, most have gone by the wayside. The groom used to carry a piece of iron (toc ferro) in his pocket, to ward off evil spirits, or mal âocchio. Sunday was considered the only day for a wedding, if the married couple was to have a life of happiness, and any other day was considered unlucky. The only exception to this was Saturday, which was generally reserved for widows remarrying.

Brides traditionally spent the night before the wedding at her parents' home and wore green, as this was considered to bring good luck, and the promise of fertility. The bride and groom broke a vase or a glass, and the number of shattered pieces predicted the number of years of married bliss. This custom was seen in the recent comedy film "When in Rome," starring Josh Duhamel and Kristen Bell.

In today's Italy, weddings are more modern, with many of these old traditions just memories. Antonella Baratta-Spina, of the Molise region, says that today, weddings usually occur on Saturdays, nobody breaks the vase for luck at the reception, the bride does not wear green the night before the wedding, and "the bride meets the man in the church because she goes to the church with her father."

In America today, many Italian-Americans like to incorporate some of their ancestors' traditions into their own wedding reception, and several of these are very popular. It is usually the duty of the best man to toast the newly married couple with a glass of wine. Some of the more common expressions of good luck include "Per cent'anni," Evviva gli sposa," "Un bacio per la sposa," and "Auguri."

Today many brides carry on the same or similar version of the Italian custom of "buste," where she carries a small satin bag (la borsa), and guests place envelopes with money inside. Sometimes the bride wears it and dances with the guests in exchange.

Almost all Italian-American newlyweds today celebrate the custom of giving their guests a small gift known as a confetti bomboniera. This tradition dates back to oman times, and the bomboniera consists of five or seven (always an odd number for luck) sugar-coated almonds wrapped in tulle or netting with ribbons. This symbolizes family life, as well as health, happiness, prosperity, fertility, and a long life together.

Of course food is of utmost importance, and the dessert table is very common today ,originating from the "Venetian hour," which is actually a Sicilian tradition of having an array of pastries, fruits, cakes in great quantities.

Tweet
More in this category: « Natale a la casa nostra (Christmas at our house) The First Christmas »