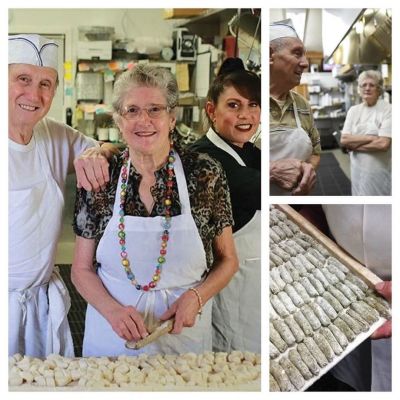 Tourists who come to California's Napa Valley may want to check out the great wineries in the area, but locals love a popular Italian American dish called "malfatti." Cheese and spinach dumplings that are smothered in sauce.

The best malfatti in the valley can be found in the back of Val's Liquor Store in the town of Napa. There you will find Clemente's Authentic Italian Takeout, which is operated by an 82-year-old man named Clemente Cittoni and his wife Maria. You will see the couple working hard to make Italian food in the kitchen along with their daughter Joanne.

After moving to Napa from the northern Italian area of Lake Como in 1961, Clemente started working as a dishwasher at the Depot Italian Restaurant in Napa before becoming a potato peeler and eventually a cook. The woman who taught him everything was Theresa Tamburelli, who invented malfatti. Theresa owned the restaurant along with her husband Giuseppe.

Many people in the area come to Clemente's little spot for malfatti, including a retired Italian American judge named Ray Guadagni. Italians started moving to this area from San Francisco, after the big earthquake in 1906. By 1950, there were two Italian neighborhoods in Napa: Little Italy in East Napa and the Brown Street neighborhood in South Napa.

Napa was a nice town, full of blue-collar workers who worked in factories and orchards. Many of these workers would often go to the Depot. Giuseppe and Theresa Tamburelli were San Francisco earthquake refugees. They opened the restaurant in 1925. Clemente started working there about 40 years later.

Theresa invented malfatti in 1930, when a baseball team from San Francisco came to town. She was going to make ravioli for the team but ran out of pasta dough, so she boiled up tiny dumplings of ravioli filling and named it "malfatti."

When Theresa retired in 1974, Clemente started running the kitchen. He made people feel welcome and made sure that they had a good time. When the Tamburelli family finally sold the restaurant, the new owner wanted Clemente to keep running the kitchen. But the new owner was a bit difficult to understand at times, so Clemente quit and started making sandwiches at a deli in Napa in 2004. Then the Depot closed for good in 2008.

When Clemente received an offer to partner with Val's Liquor Store in 2008, he took it and started making malfatti again. The Cittoni family also have great gnocchi, minestrone soup and spaghetti on the menu as well as scalloppini and meatball sandwiches. Be sure to seek out this great Italian food spot if you are ever in the Napa Valley.