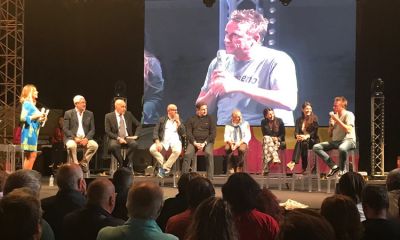 I had never been to Sicily so when my Sicilian friend, Federico, proposed a trip, I was game! He would handle the driving over the disparate Sicilian roadways, while I would navigate and take in the amazing sights of this magnificent island, the largest in the Mediterranean with its rich history reflected in Greek temples and Byzantine mosaics, as well as one of Europe’s highest active volcanoes, Mount Etna and beautiful tropic-like beaches.

On Federico's suggestion, we started our Sicilian adventure to coincide with the annual International Couscous Fest held in the town of San Vito Lo Capo. San Vito Lo Capo, located on a promontory jutting dramatically into the Tyrrhenian Sea on the northwest coast of the island, has been hosting the Couscous Fest, also known as the International Cultural Integration Festival, each September for the past 20 years. The festival celebrates multiculturalism with an international couscous cook-off as its main event with chefs invited from all over the world. A truly unforgettable setting for this festival’s message of peace and integration between cultures.

We arrived on a beautiful, hot, sunny day; settled into our B&B a few steps away from the festival center, then took a walk to check things out, feeling the excitement building. Within a few minutes I spotted a table with more Italian licorice than I had ever seen. Federico, seeing the look on my face, politely inquired if I was alright but could only watch in amazement as I repeated, “Voglio questo…e questo…e quello,” until I had spent over 35 euros for a bag of licorice!

The heart of San Vito and the festival is Piazza Santuario and its radiating streets where artists, vendors, concerts, and activities took place almost continuously during the 10-day festival. Tastings of the day's fare, cooking demonstrations by famous chefs and symposia by experts on biodiversity all helped bring the festival-goers together through cultural exchange and food. The festivities concluded each evening with musical performances on the main stage.

Over the course of the 10 days, 10 chefs from around the world challenge themselves and each other to come up with original couscous recipes that highlight the flavors, scents and colors of their country. Judging is by a panel of experts, as well as festival-goers themselves, who vote for their personal favorites. “Make Couscous, Not War” banners reflected the festival’s theme of “Welcome Diversity.” The U.S.'s representative, chef and television star Marc Murphy, spoke in the piazza, highlighting some “core American themes, such as the value of diversity and integration and the use of food as a tool for mutual understanding among people of different cultures and origins.”

In addition to booths featuring the couscous meals in competition, many local restaurants offered typical Sicilian food: ringlet pasta (casarecce), rice balls (arancini), chickpea fritters (panelle), and, of course, cannoli! On the recommendation of our friend, Giuseppina, from Rome, we dined at Profumi di Couscous. San Vito is a tuna-fishing village so we had to try their fresh tuna (tonno), with couscous and pasta with eggplant (Pasta alla Norma). Delicioso!

After two days of too much good food, we ventured out to the beautiful coastline of Sicily’s oldest nature preserve, Riserva Naturale dello Zingaro, a short but precipitous drive east of San Vito. Zingaro's walking trails skirt cliffs high along the Tyrrhenian reminding us of the California coastline near Big Sur with similar vegetation and birds, hidden coves and caves. After many miles hiking in the heat, we spied a beautiful inlet beach far below and decided to cool ourselves in its azure waters. A typical Italian beach covered with large stones, we joined families sunbathing, eating and swimming, and reveled in the tranquil ambiance of blue water, blue sky and warm sun, resting before the long walk back.

Having refreshed ourselves back in San Vito, we headed to the festival for dinner. All couscous meals in competition were 10 euros and included a glass of vino and a ricotta-filled dolci. Most of the dishes featured fish or meat from many countries including Palestine, Senegal, France, and the U.S., but we decided on the vegetarian meal, a large helping of couscous with ceci.

On the third day, which we planned as our last with all of Sicily still before us, we walked the festival streets, swam alla spiaggia di San Vito and had another amazing cena. In anticipation of an early morning departure, we went to bed right after dinner, but instead of restful sleep, we were kept awake by rising Italian singing star Francesco Gabbiani performing well into the morning, revelers walking and talking and a couple arguing loudly under our window. Lesson learned: book the B&B far from the madding crowd!

Tweet
More in this category: « Kochen wie in Neapel (Cooking as in Naples) MUST EAT: Cleveland's Own Little Italy Pasta Sauces »