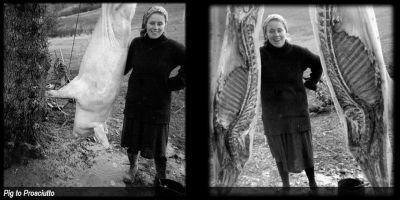 An inordinately cold winter is perfect for pig slaughtering time: once the pig is slaughtered and turned into prosciutto, capocollo, salami, pancetta (“little tummy” or bacon), sausages (all cured with salt, not via smoking), the cold weather assures (one hopes!) that the meat cures well. Warm weather is hazardous: a renegade fly could survive and burrow into the meat. La tragedia happened to us one year: we sliced into the first of our two magnificent prosciutti in July and maggots crawled out. Frustration, anger and also tears ensued. We had bred the sow and raised the litter’s chubbiest piglet to adulthood – and to a prosciutto-end.

I remember our first pig slaughter and waking up early to feed the fire under our cauldron hanging in the fireplace. It’s the first task of the day of slaughter. The boiling water is poured over the entire pig immediately after slaughter so that the hair can be easily scraped off the skin. The skin then becomes cotiche (cotiche e fagioli and lenticchie e fagioli – beans or lentils with pigskin are a delicious local cuisine in the cold season!). The water was at a rolling boil just as I heard Adamo’s raspy voice greet Pino. They were just under the kitchen window, outside of our pig stall. I knew that our pig, Zsa zsa, was done for. In those days, Adamo, who farmed most of the year, moonlighted as a pig butcher or norcino during the winter months. Norcino means “the man from Norcia” as the mountainous medieval town in southeastern Umbria is famous for its sausages and prosciutto.

A farm neighbor, Marino Pica, once told me about pig slaughtering, the time of miseria, when he was a boy, over 40 years ago. In a busy farm kitchen on the eve of the slaughter, the children eagerly eyed the sausages, knowing that they would soon be grilled. That night, though, Nonno decided that there could only be one sausage per child as the meat would be needed throughout the year (the sausages could be hung to dry in the store room off the kitchen). The norcino working at the grinder saw the hungry eyes peeping over the tabletop as the meat slipped out into the casings. When no one was looking, he cut off a few sausages and slipped them to Marino. The children scrambled out the door and down the steps. They went out to the fields in the icy cold, made a fire and roasted the sausages.

Miseria is long gone here in Umbria and in Italy in general. But the pig-slaughtering still remains a winter tradition in rural areas, though the conclusion has a twist. The slaughtering process is basically the same: the pig is dragged out of the stall by tying a rope around the snout. (I still remember Zsa zsa’s frantic squeal – muffled by the pillow which I stuffed over my head.) The norcino then shoots the pig in the forehead and it drops to the clean grass. The throat is slit, its blood gathered (for sanguinaccio, a sweet sausage) and then the boiling water is poured over the carcass and the skin scraped. The pig’s feet are tied and the carcass is hauled up a tree limb to facilitate the quartering. The following day, the farm family and friends gather to assist the norcino in the day-long preparation of the prosciutto, capocollo, pancetta, lard, salami, and sausages. Nowadays, freezers are also packed with pork chops, pork roast and ribs as less of the meat is destined to capocollo, sausages and salami. During this time of year, it’s easy to catch wisps of smoke rising from behind farmhouses whose fattened pigs are meeting their demise.

Tweet
More in this category: « Producing Wines with the strong Imprint of Friuli since 1559 Cooking up Culinary Classics ...with Chris »