"Buon Appetito or Not, that is the Question!" 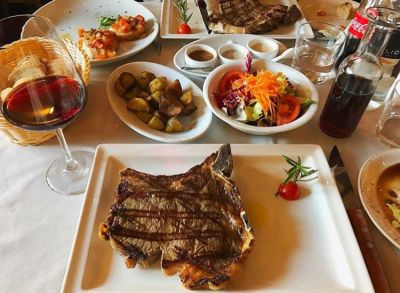 During one of my last visits to Italy, as I was about to eat lunch with a friend, I picked up my fork and wished her “buon appetito!” Surprisingly, she didn’t respond “grazie, altrettanto” (“thank you, same to you!”) as I had expected, but rather an abrupt and sudden “we don’t say that anymore!” At that moment, I was so happy to be back in my native country and in the company of an old acquaintance that I didn’t question her odd comment. Later, I discovered that wishing “buon appetito” had lost some popularity due to the characteristics of socializing in modern Italy. The food has become more of a window dressing to the conversation than a means to satisfy the appetite. However, my friend’s remark was only partially true and even misleading. The question surrounding the use of this expression, in fact, involves much more than people might think. Even though “buon appetito” is commonly perceived as a cheerful wish by many, there are also others who consider it a bad table habit and disregard its use altogether.

The exact origin of buon appetito is not quite certain, but it seems to have first been used during the Middle Ages when servants had access to very little food. During fruitful harvests and exceptional events such as weddings, the nobles and other high-ranking figures would invite their servants to join in the celebrations and would say to them “buon appetito.” Back then, this expression represented an invitation directed to the lower classes to indulge in the food the nobles offered to them. In the 16th and 17th centuries, the economic conditions improved greatly which meant an increase of sustenance available to the populations. “Buon appetito” was regarded then as a wishful expression to enjoy eating after having suffered centuries of famine. The tradition was later carried on by the middle class and was handed down from one generation to the next, reaching the tables of our contemporary society.

One reason some people dislike this expression relates to the historical circumstances when this expression was born some centuries ago. Since it was first used by a high-ranking person directed to someone such as a servant, buon appetito is still linked to the idea of a favor granted to the inferior. Thus, some say it might be perceived as offensive, although nowadays, the same two words are not limited to just one social class.

As an alternative, some people wish “buon pranzo” (“have a good lunch”) or “buona cena” (“have a good dinner”) avoiding, in this way, referring directly to the food itself. Giovanni Della Casa (1503- 1596) author of “Galateo: Or, the Rules of Polite Behavior,” in the chapter “Bad table manners and getting keen-walking drunk” lists the guidelines one should follow at the table. Among other predictable suggestions such as not scratching one’s head and chewing loudly while eating, he also suggests that it is not at all polite to make references to the food at the table. Della Casa writes: “you must not do anything to proclaim how greatly you are enjoying the food and the wine, for this is for tavern keepers.” Alluding to the food while eating is, then, what he believes to be “not laudable, even though the majority of the people do it.” This suggestion is also especially questionable when we think about the importance food plays in our own Italian culture. For instance, an Italian mother might greatly object to the latter concept. In fact, she might be quite offended if her family does not comment at all.
Some individuals also view the use of buon appetito to have additional underlying negative allusions. The problem lies with the word “appetite” (from the Latin appetitus) in particular. Saying “have a good appetite,” is an expression that indirectly implies the idea of a glutton, focusing more on the quantity than the quality of the food.

For me, wishing “buon appetito” to a friend was not only a spontaneous gesture of courtesy but also a reflection of my own sense of Italian culture. To her, it was, instead, an obsolete tradition that does not conform to modern society. Nevertheless, we can’t deny the fact that wishing someone to enjoy the food is still very much a symbolic tradition of the Italian culture. It is still practiced by many families in Italy. We hear it regularly from our Italian relatives and friends. We hear it from servers at restaurants who usually salute us with a cheerful “buon appetito” upon setting the food on the table. And this should mean a lot!