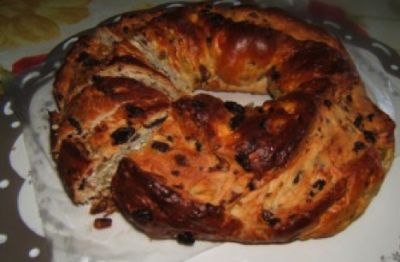 Perugia is not just proud of its chocolate, Etruscan artifacts and the Umbria Jazz festival. This provincial capital of Umbria also boasts not just one but three patron saints! Legend tells us that one of them, San Costanzo, first bishop, was buried outside of the city’s Roman walls after his decapitation in the 3rd century. Celebrations start the night before his feast day, January 29, with the luminaria, the candlelit procession to the Church of San Costanzo, built on the site of his martyrdom. On the Sunday after his feast, i Perugini gather at a solemn High Mass celebrated in his honor in the Cathedral and then throng the 80 stands at the traditional open market, la Fiera, which always follows a saint’s feast day. The Fiera di San Costanzo fills Borgo XX Giugno, the street heading to his church, San Costanzo.

The dolci stands compete in proudly offering the best torcolo di San Costanzo, a ring-like cake made with pine nuts, raisins and candied fruits. According to popular tradition, the faithful who buried him after his martyrdom put a ring of flowers around his neck to hide the ugly wound; hence, the ring-shaped sweet to honor him. A city document from 1595 even defines the required ingredients. An incision of a pentagon is made on the bread to represent the five city gates of Perugia. For the past few years, the city of Perugia has celebrated this feast with a il miglore torcolo competition among all the area’s bakers. In the morning, all the citizens are invited to join in a “comparative tasting.” Il torcolo was once savored only on the feast of San Costanzo and made only in the home but today, il torcolo is in bakery windows throughout the year. Another tradition, lost until a few decades ago, is when an engaged couple visits the Church of San Costanzo to stare at the Saint’s image. If the Saint winks at the young woman (and only she can see the wink), the couple will be married within the year. If not, the young man consoles them both with a gift to her of a ring-shaped, sweet, il torcolo – and hopes for the Saint’s wink next January!