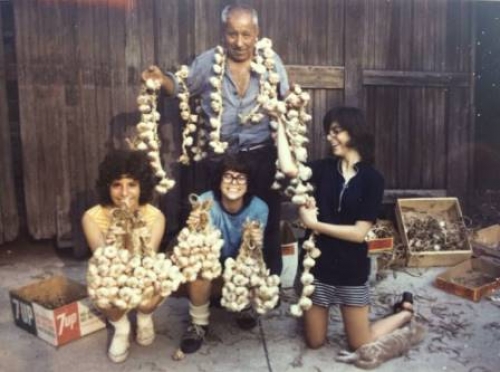 This month's La Gazzetta focuses on gardening and the first thing that comes to mind when I think back to my family's wonderful vegetable garden is garlic--that amazing aromatic herb. We can trace the use of garlic by humans to over 7,000 years ago in Asia, where garlic grew naturally. It has been used for thousands of years, not just as an ingredient to add flavor to a dish but also for medicinal purposes. Numerous scientific studies have proven what our grandparents always knew; that garlic can help fight colds, cancer, high blood pressure, heart disease, and can be used to deworm the family dog. Military doctors used garlic during WWI and WWII to help fight gangrene.

Garlic is used more in Southern Italian cuisine than in the recipes of Northern Italy. A certain "cosmopolitan" prejudice casts the ingredient as a marker of peasant cooking. In fact, former Italian Prime Minister, Silvio Berlusconi, was known to show a disdain for the herb and requested his staff not eat it, lest they surround him with "garlic breath." A few years back, some top chefs in Rome joined the revolt against garlic and banned it from their kitchens. Fortunately, for us who love garlic here in America, that movement did not make it across the Atlantic.

In fact, garlic was the biggest crop my grandparents planted, with tomatoes and zucchini following right behind. I remember watching my grandmother and father plant rows and rows of garlic in our garden. We did not plant it just for our own consumption, but to share with friends and family without gardens of their own. What I enjoyed the most about the garlic growing experience was sitting under the shade of our big maple tree with my grandmother as she expertly braided string after string. To me and other Italian Americans, the garlic braid is as emblematic of Southern Italian culture as the red pepper ristras of our southwestern states.

So how did garlic become such a staple in Italian American gardens and cooking? Before the big influx of immigrants from Southern Europe, at the beginning of the 20th century, garlic was not widely used in American cooking or even well-known in the U.S. Our immigrants brought garlic cloves tucked away in their steamer trunks. Easily cultivated, garlic is planted in the fall in Northern climates, about six weeks before the first frost and is ready for harvest by late spring and early summer. We are lucky here in Northern Ohio that garlic is hardy to zone 4. Once they settled here, our ancestors began to cultivate the plant that they found missing in U.S. grocery stores.

Thanks to our immigrant forebears, that wonderful aroma of roasted garlic or a sauce made with sautéed garlic soon found its way wafting down the streets of immigrant enclaves across America. Face it; we Italian Americans love our garlic. We smear it on bread (which, by the way, is definitely an Americanized version of bruschetta), we add it to our sauce and some of us love it so much that we eat it raw. Finally, those descendants of the Puritans who had no previous exposure to delights of the bulbous herb were hooked as well.

A recipe from the cookbook "Lidia's Italy in America" by Lidia Bastianich.

Bring a large pot of salted water to boil for the pasta. In a large skillet, heat olive oil over medium heat. Add the garlic and let sizzle until garlic begins to turn golden, about 2 minutes. Add the spaghetti to the boiling water once you begin cooking the garlic and give the spaghetti a stir. Once the garlic is golden, add the peperoncino and let toast for a minute, then ladle in 2 cups pasta water. Bring the sauce to a rapid boil. Season with salt based on taste (and how salty your pasta water is). Once the sauce has reduced by about half and the spaghetti is al dente, scoop the pasta from the water and add to the sauce. Add the parsley. Cook and toss to coat the pasta with the sauce. Remove from heat, add the basil and grated cheese. Toss, adding a final drizzle of olive oil, and serve immediately.

Tweet
More in this category: « Watermelons Espresso on Wheels »