A Toast to an Italian Wasp 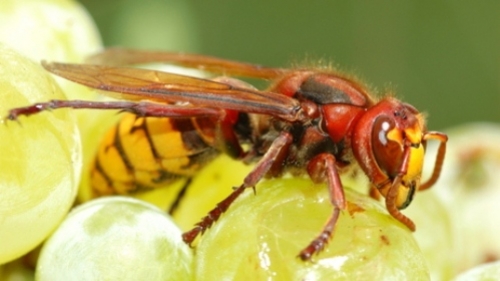 Sometimes I feel a bit quirky in that I listen to National Public Radio for news and insight into things. Often the information may not be suited for a wide range of listeners.

One afternoon in early August I heard the promo for a story on the relationship between wasps and regional wines in Italy. My ears perked up and I mentally tuned in to the broadcast in the hope of learning something that I have an interest in, wine making.

It seems that Professor Duccio Cavalieri, an Italian microbiologist who comes from a family of winemakers in the Chianti region, has been doing field research and DNA sequencing for over 15 years. He has dedicated his research to establish a connection between the tastes of regional wines and the European hornet (Vespa crabro) which hovers about the vineyards during the growing and harvest season.

Professor Cavalieri states that there are not many insects that can feed on the grape due to its thick skin. The only insect that can successfully pierce the skin of the maturing grape is the European hornet. The hornet does not harm the grape but because it has natural yeast in its belly, the hornet injects a bit of its yeast into the grape. In a way, the hornet is actually jump starting the fermentation process within the grape itself! More importantly, the hornet is infusing the taste of the regions flora into what will be the finished wine from that region giving the wine its particular character.

Professor Cavalieri said that "since the time of the early Romans, it was recognized that it was important to have flowers and insects around the vineyards to improve the flavor and the characteristics of the wine. After these years of study we really know more about that relationship." Cavalieri also states that everything is linked together in the vineyard. "One of the most beautiful aspects of wine is the fact that basically it is complex. It is made of different parts and those parts communicate to several parts of our brains."

Harvard University Evolutionary Biologist, Anne Pringle was not involved in the research but says that Cavalieri's work sends a signal to wine growers who may consider using pesticides to control the wasps and other insects in the vineyard. If the growers like having their grapes fermented with local yeasts, than they must do what they can to preserve the balance of this natural phenomenon. Of course, it is in their best interest to preserve the complexity of the wine.

To quote Professor Cavalieri, "A toast to the wasp, truly a wine lovers best friend."