From the Italian American Press: “With Tears and Laughter” 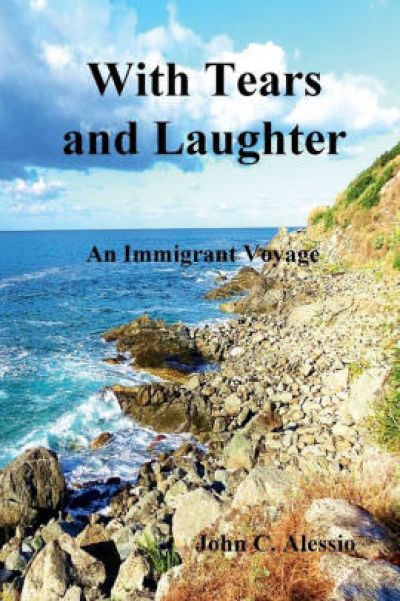 From the first paragraph describing the deep descent of a winding driveway in present-day Joppolo on the east coast of Calabria, across the toe to the western slope of the Aspromonte, and the hillside village of Canolo at the turn of the 20th century, this historical fiction provides a realistic look into a family of Italian heritage and their journey in becoming Italian American.

With an informative approach, John C. Alessio starts “With Tears and Laughter” in modern times, making note of the post office clerk “whose fear of customers who don’t speak fluent Italian is at least as great as the fear those customers have of trying to speak to him.” Expressing different views of a situation offers an expanded outlook and gives readers a better opportunity to experience the passages through the characters, the dialogues, and the unfolding events.

A retired couple, Luke and Ruth, arrive in Joppolo for a three-month stay at their condominium, but why Joppolo? Alessio provides a long and short answer. The long answer begins in “1898 when Salvatore Adamani set sail for the Americas.” After the unification of Italy, “the southern traditional way of life became severely challenged,” and many men left the region in search of jobs. The exodus continued. “On the morning of July 15, 1912, Lorenzo Adamani [Salvatore’s son] quietly emerged from his makeshift bed” because he, too, was leaving his home in Canolo for America.

Moving back and forth through a century of historic world events and family occurrences, Alessio presents a painstaking view of becoming Italian American in addressing numerous incidents that affected Italian immigrants’ lives. While “nobody really knows what happened to” Salvatore, the details of Lorenzo’s life are well developed and interspersed with the lives of his children and grandchildren.

Two of Lorenzo’s children serve in WWII, “the right thing to do.” Thirty years earlier, Lorenzo learns “Italian immigrants were being recruited and taken advantage of by American companies.” The dishonesty is realized: “After two weeks, we got paid for the first time yesterday. Instead of giving us money for our labor they gave us a bill for all of the expenses they incurred by bringing us here. We have no money.”

By chance, Lorenzo meets an Italian who, along with others, “came to the United States in first class cabins,” and he soon has a job in a flourishing Italian restaurant. A hostile encounter changes the course of his life and, in 1916, with recollections of “an Italian settlement in New Orleans,” Lorenzo races to Grand Central Terminal and takes a train heading south.

On a stop in Atlanta, Lorenzo witnesses intense discrimination and “informal slavery;” and in New Orleans, in learning that it was Italians who were lynched in 1891, he reexamines “his own [beliefs on] stereotypes and prejudices.” Once again seeking work, he travels to Pennsylvania and works in the coal mines with an estranged brother; but as WWI enters its third year, the Italian government sends notice that he must report for duty.

“By the time Lorenzo returned to Italy, reported for duty, and finished his training, the war was over.” He returns to his hometown and “wanted to stay but was certain he would not be able to do so indefinitely.” In Calabria, he marries and starts a family, but returns to Pennsylvania and works in a steel foundry. In 1924, his wife and child join him; but less than three years later, Lorenzo endures another loss.

After the 1924 Immigration Act, that “made entering the United States extremely difficult for Southern Italians,” Lorenzo decides to become a citizen of the U.S., travels to Calabria again, and returns to a rented home and property in America to, once more, start a new life.

Like a time-traveler, the reader is transported from Italy to America, stopping at selected segments in the life of Lorenzo and those who influenced him. Extensive details draw the reader into each scene, and passages with dialogue include English phrases written in the dialect of a southern Italian immigrant, sometimes interfering with the flow, as it would in real life.

A map of the towns mentioned and a list of characters give the reader further perspective into the immigrant experience and the Epilogue provides the “short answer:” a look into being Italian American.

Tweet
More in this category: « Potentially Dangerous: When it was a Crime to be Italian Road to the Lemon Grove »