Death And Venice: A Cinematic Metaphor 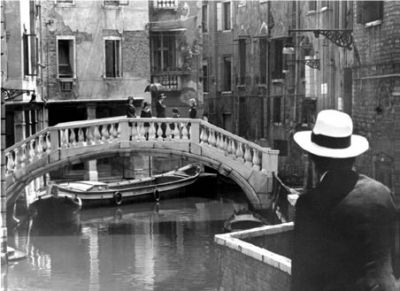 Portrayals of Venice in the history of painting and literature have evolved over centuries; moving from reality to myth to dream to metaphor. During that long history, images of Venice slowly transformed from those of a sun-drenched, enchanted playground to those of a darker, more sinister place. Filmed portrayals of Venice have followed much the same evolutionary track as seen in cinema’s sister arts but in an accelerated and compressed fashion (see David Lean’s “Summertime,” 1955, for a vision of Venice as a sunny playground for tourists.)

Few cities in the world have captured the creative imaginations of writers, composers and visual artists like Venice. Built on water, laced with serpentine canals, subject to diaphanous atmospheric effects of light and color, and filled with buildings eroded by the salt air, encrusted with mosaics and poised like delicate cages over their mirror-like reflections, the city exists more as a hallucination and dream than as a physical and material reality. It is this ephemeral and transitory nature of Venice that lends itself so well to the kind of personal reflections, melancholic broodings and romantic fantasies that many visitors have fallen prey to from the city’s earliest origins to the present day.

The list of great works of art created in Venice, inspired by visits to the city or taking the city as their subject or setting is a long one. Certain artworks, however, so encompass the sensations and spirit of the city that, although the work itself may have nothing to do with Venice in its location or plot, the Venetian inspiration seems to exist as a kind of subliminal subtext. First and foremost in this regard is Wagner’s opera “Tristan und Isolde,” a work so ethereal and passionate in its music that one is tempted to say that it could only have been written in Venice.

The allure of Venice for 19-century British, American and French painters such as Turner, Sargent, Whistler, and Monet is well known. But the list of “northern lights” attracted to Venice (in addition to Wagner) includes Lord Byron, Johann Wolfgang von Goethe, Herman Melville, Robert Browning, Charles Dickens, John Ruskin, John Addington Symonds, Marcel Proust, Henry James, Hugo von Hofmannsthal, Friedrich Nietzsche, Rainer Maria Rilke, and Ezra Pound, to name only a few. All saw Venice as a city with a dual nature, stressing such contrasts as beauty and vacancy, voluptuousness and weariness, radiance and fatality, ecstasy and dissolution, health and disease. For all these individuals, Venice was the nexus between north and south, east and west. It was the unique confluence of all desire.

Twentieth-century artists were no less fascinated with Venice as a source of artistic inspiration, most notably in the realm of modern film. Again, the number of films set in Venice and of filmmakers who have attempted to capture the special visual qualities of the city are extensive. What is of particular interest, however, is the ways various filmmakers have thought about the city and the evolution of their personal and cinematic approach to Venice itself as a protagonist in their films.

Thomas Mann’s 1912 novella “Death in Venice” and the Visconti film based on it occupy positions of primacy in this discussion for they clearly influenced both their later literary and filmed counterparts. Beyond their Venetian settings, three specific leitmotifs link these films together. They are Venice as seductress of the Northern visitor, Venice as labyrinth and Venice as the locus for liebestod (love-death).

At the heart of Venice’s distinct geography, history, culture, and psychology lies the archetype of the labyrinth. In his “Italian Journey” (1786 – 1788), the German poet Goethe wrote, “I have often sighed longingly for solitude, and now I can really enjoy it...Perhaps there is only one person in Venice that knows me, and we shall not soon meet...Toward evening, again without a guide, I lost my way...I tried to find my way out of this labyrinth without asking anyone...but it is an incredible maze.” (1)

Both Nietzsche and Wagner had deep and long-lasting attachments to Venice. Thomas Mann, in turn, was fascinated by the works of both these individuals. Their thoughts were formative influences on his “Death in Venice” and, by extension, on the filmed interpretations of Visconti, Roeg and Schrader. Writing about Venice in his “Ecce Homo” (1908), Nietzsche states, “Seeking to find another word for music, I inevitably come back to Venice. I do not know how to distinguish between tears and music. I do not know how to think of joy, or of the south, without a shudder of fear.” (2)

Much of Mann’s novella and the films by the three directors deal with this polarity between the Apollonian (rational) and the Dionysian (emotional) aspects of art and human nature articulated in the writings of Nietzsche, most especially in “The Birth of Tragedy” written in 1886.

In all three films, the protagonists get caught in the literal and symbolic labyrinth that is Venice. At pivotal moments in the stories, they receive clear warnings to leave the city and are told that they are in danger if they remain. They ignore these warnings and in so doing seal their fate. They thus become the ultimate embodiment of the northern visitor fatally imprisoned in the Venetian labyrinth.

One thing remains constant – the continuing allure of Venice, a city that has long acted as the location for the exploration of basic human emotions, needs and fears. If the city were to be swallowed by the sea tomorrow, it would remain for us as a modern-day Atlantis and would continue to attract us and call to us from the depths of its watery grave. (3)