Morisco: Nurturing a Lifetime of Experiences Into a Unique and Personal Reality 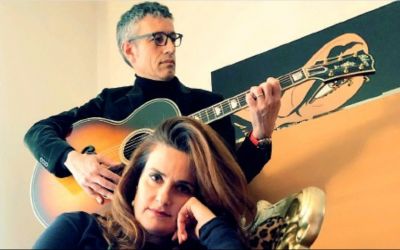 “Rome wasn’t built in a day” was a quote that actually originated in France in the late 12th century and later translated into English by British playwright John Heywood in the mid-1500’s. In more recent times, the phrase has been expanded to include “but they were laying bricks, hour-after-hour, one at a time.” These bricks, which served as the foundation, were the means by which the result was made possible. Such a path was followed by the Italian pop group known as Morisco, founded 25 years ago by musical artists Piergiorgio Veralli (songwriter and poly-instrumentalist) and Francesca Russo (songwriter and vocalist).

Residing in Bolzano in the province of South Tirol, nestled in the northern-most region of Trentino-Alto Adige, this husband and wife duo has taken a thoughtful and methodical approach to their recent debut recording “L’ultimo colpo” which was released on Feb. 17, 2020. The album, 25 years in the making, contains 15 songs, 12 of which are original along with three obscure, but personally meaningful covers. By day, Piergiorgio is a journalist who works as a news correspondent for the local affiliate of the national RAI broadcasting company. Francesca most recently served as the director of the product marketing department of a local retail business. Despite busy career schedules and parental duties raising their daughters, the two dedicated time during the late evening hours to begin their journey of carefully and painstakingly crafting the songs that would not see their way onto an official recording until the compositions contained therein had exceeded their expectations and were ready for publishing.

Their creative process was facilitated by their common interest in numerous renowned international artists and various styles of music. The Beatles and post-1980 rock bands such as Oasis, Cranberries, Blur, and R.E.M. all provided vital inspiration while the classy refined sounds of Burt Bacharach also had a large hand in influencing their eventual style. Legendary Italian “Cantautori” (Songwriters) such as Paolo Conte, Edoardo Bennato, Pino Daniele, and Lucio Battisti along with revered female song interpreters such as Mina and Mia Martini left their indelible mark on them. Newer Italian electro-pop groups including Delta V, Bluvertigo, Baustelle, Ustmamò, and Scisma served as more contemporary sources of ideas.

Although they did not always see things eye-to-eye, they patiently discussed their differences and eventually compromised for their greater good. Their style has been described by fans and media alike as techno-pop, however elements of jazz, blues, funk, and rhythm-n-blues are also carefully woven within the fabric of the recording. The pre-production mixing process was completely overseen by Piergiorgio over many sleepless nights. The final mastering included the input and talents of local musicians such as Alex Refatti, Gregor Marini, Luca Sticcotti, and Stefano Zulian. Song themes for Morisco begin as sketches of “fumetti” (comic-book) characters which are then distilled into an outline. The lyrics are then developed to support the story being told and show a distinct preference for the “evil element” or “antagonistic character” which they find more stimulating. They also give attention to the pitiful demise of once-great cinematic individuals. Movie thrillers, spy stories, front page headlines, and classic film-noir vignettes account for the reminder of their diverse subject matter. The cover artwork was designed by Stefano Biglia and features colorful comic-book caricatures of Francesca and Piergiorgio.

Morisco made the conscious decision to record the album in their native Italian language remaining true to their roots and resisting any temptation to sing in English as many other Italian artists have chosen to do. The opening three tracks “Don Diego,” “Cineprese” and “Stilla di te” present a diverse and delightful sampling of upbeat guitar-driven and keyboard-flavored sonorities that set the stage for the remainder of the recording.

Since they are unsigned, independent artists, they are not beholden to any label demands regarding recording and touring. This also means they do not have the financial resources to extensively promote their new release. Therefore, they have instead chosen to utilize the popular and easily accessible online video-sharing platforms to reach new markets.

Morisco released two new music videos on their YouTube channel that immediately gained attention: “Eva canta” and “Un giorno difficile.” These productions feature classic movie footage combined with new video content to emphasize the lyrical content of these songs. Aside from the musical aspect of the group, life in Bolzano presents its own set of challenges as the city is a mix of two large and distinct cultures as the minority-based Italians co-exist with the larger German-speaking Austrian community in South Tirol. Performing live is even more challenging as Italian artists are compelled to sing familiar cover songs while avoiding any original material, especially if it is not performed in either English or German. Also complicating matters was the outbreak of the coronavirus pandemic which halted all public performances for the foreseeable future until the emergency ban is lifted. In the meantime, Morisco is anxiously looking forward to an official Fall 2020 release date including a tour throughout the northern areas of the peninsula. For more information you can visit their Facebook page at https://www.facebook.com/morisco2016/.