From the Italian American Press: The Seven Golden Apples 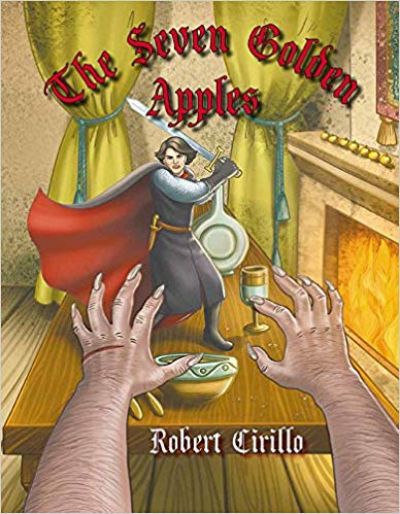 The Kingdom of Pumaria with its rich, fertile land is located between a treacherous mountain range and the large Mediterranean Sea. It’s an ideal location for the apple trees that grow there, some reaching 30 feet high, and all bearing bright yellow apples that look like gold.

The royal family, King Giuseppe, Queen Filomema and their seven sons, live in the castle built on the bank of a river near the foothills of the mountains. “This was considered to be the most secure place in the kingdom to build the residence of the royal family.” In this prosperous kingdom, the wealth was shared with the inhabitants and after a particularly abundant harvest, the king “asked one of the most talented goldsmiths in the land to make seven apples of pure gold,” each engraved with the name of the king’s sons: Tosco, Doros, Albano, Zoticus, Antonio, Stolos, and Laticus. The golden apples were “attached to the branches of the large apple tree in the center of the inner courtyard of the castle.”

So begins the folktale Robert Cirillo listened to as his father recounted the fable told by his Calabrian grandfather, but this is Robert’s version. He’s been telling the story for a while and after his father passed, he resolved “to put the story in writing, to preserve it for future generations.” Robert researched to find the source of the story and determined that, although parts of other stories may have been woven into the tale, his great-grandfather was its originator.

Robert developed the characters “embellishing the story considerably” and transformed the spoken tale into a lavishly illustrated book. He went to Calabria to learn more about the town of his ancestors and to “get some photographs of the village where my great-grandfather was born.” Robert also wrote a story about that adventure which can be found on the Italian American Press.

Back in Pumaria, the golden apples disappear, one by one. Each disappearance is accompanied by a black cloud and a strong wind. With Stolos and Laticus on an “annual voyage to sell apples and other goods to the various kingdoms across the sea,” the older siblings attempt to thwart the golden apple thief. None prevail and when the younger brothers return, Stolos makes another futile attempt to guard the last two golden apples. Building on the knowledge of his six older brothers, Laticus derives a plan to protect the last apple and, although unsuccessful, his actions lead to a discovery that could have great consequences.

In this folktale, the perilous journey of Laticus is an exciting adventure. As he descends into a cave so deep, “He looked upwards and realized that he could also no longer see the light from the surface. The darkness was now complete. Like his brothers before him, he began to imagine that he was hearing strange sounds and smelling strange odors.” In walking through a forest, “Laticus stopped in his tracks and stared at the animals that he saw huddled behind trees and plants. The more he observed these extremely timid animals, the more he realized that there was something very eerie about them …” As he approaches the castle on the hill, “Laticus was not intimidated … and even though he knew that he should be feeling exhausted after all that he had been through, he was nonetheless feeling excited and anxious to continue on his mission.”

“The Seven Golden Apples” is a delightful tale filled with numerous plot twists. Just when you think you know where the story is heading, it veers in a different direction. With all its twists and turns, though, the story stays on course and answers any questions readers and listeners may ask. In the beginning of the story, why did Laticus enter the perilous mountain range and what was that creature following him? Although the youngest, why is Laticus – an accomplished swordsman – the only son able to search for the seven golden apples? After his journey to a new world, how does Laticus return to the Kingdom of Pumaria?

Spanning through several generations of an Italian and Italian American family, both adults and children will enjoy the timeless messages of faith, perseverance and devotion woven into this mystical tale.