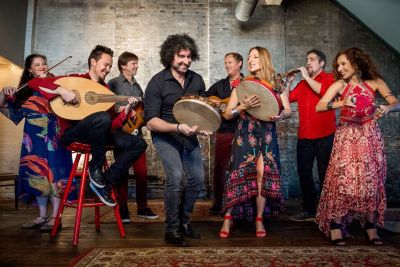 “Been there, done that” is a trite expression that acknowledges a person’s frustration or weariness in certain instances and often indicates their unwillingness to seek new opportunities or lethargy in reaching beyond their grasp. The assemblage of exuberant and musically-endowed individuals known as Newpoli cannot be accused of being indifferent or unimaginative. The Boston-based, world-music ensemble is an acoustically-oriented and experience-driven outfit that seeks to personalize their extensive life adventures through song, music and dance. Though their professional recording career dates just over 10 years, their individual and decades-long, global encounters provide the source and inspiration for their innovative dedication to their craft.

The groundwork was laid in 2003 as founders Carmen Marsico, Björn Wennås, Angela Rossi, and Fabio Pirozzolo forged an amalgam of varied, yet focused ideals that yielded an unmistakably passionate message; enjoyable to the ear, soothing to the heart and nourishing to the soul. The group’s name is a synthesis of metropolitan Naples’ ancient Latin name, Neapolis, (meaning “New City”) partially anglicized into Newpoli(s); signifying a new beginning or new music for this burgeoning band.

Carmen serves as one of the lead vocalists, percussionist, dancer, composer, and co-artistic director. She hails from the southern region of Basilicata and is a tireless researcher and educator of southern Italian culture who enjoys an eclectic blend of contemporary jazz as well as a healthy serving of Mediterranean sonorities. Björn is the guitarist and musical director who began performing on stage at age 12 in his native Sweden. He later moved to Boston and has dedicated himself to sharing his immense musical knowledge as an educator and performing in various other musical groups. Angela is originally from the seaside city of Naples and serves as lead vocalist, percussionist, dancer, composer, and co-artistic director. She is also a multi-linguist who teaches aspiring musical artists and remains active in various theatrical productions. Fabio is the male lead vocalist and multi-percussionist who moved from the region of Lazio to Boston after a successful career touring with popular folk groups throughout Europe. He remains active with several other groups in addition to his duties with Newpoli. When he is not performing, Fabio also teaches music classes. Completing the band is Dan Meyers, a poly-instrumentalist who is a versatile woodwind specialist and provides percussive frame drum accompaniment. He is also an educator who imparts his experiences to musical novices. Karen Burciaga is a classically trained violinist who has performed extensively throughout the U.S. She has studied historic dance, maintains a private violin studio and provides music tutoring services. Jussi Reijonen is Finnish by birth, but due to his father’s work responsibilities, spent time as a youth and teenager in Jordan, Tanzania, Oman, and Lebanon before finally settling down in Boston. He is a classic guitarist and plays multiple ancient stringed instruments. Jussi is a composer and has produced his own solo instrumental recording. Jeff McAuliffe is an in-demand musician for numerous other recording artists and plays the fretless bass for the group. Like others in the band, he is a graduate of the prestigious Berklee College of Music.

Five years after their formation and armed with valuable experience gained from touring and performing, the band released their debut album “Newpoli” (2008) and celebrated the occasion by making their European debut at the Diacetum Festival in Tuscany, Italy. The recording contained 12 songs including many well-known compositions interpreted in their own ethno-folk style. It featured tarantella, pizzica and tammurriata southern-music styles performed in various linguistic dialects. Familiar pieces such as “Marechiare,” “Luna rossa” and “E spingule francese” received a very personal and distinctive re-interpretation by the group. Newpoli would spend the next few years touring and sharpening their stage presence. When the band returned to the studio, they decided to record the Christmas-themed album “Musica di Natale” (2012). The release contained many traditional regional and obscure seasonal compositions including “Quanno nascette ninno,” “La santa allegrezza” and “Nascette lu messia.”

Newpoli would quickly return to the studio and put the finishing touches on their third album “Tempo Antico” (2013) which contained several 16th century compositions interspersed among upbeat tarantella-pizzica pieces including “Trapanarella,” “Mamma la rondinella” and “Dicitencello vuje.” Their growing fan base began seeing what the critics had espoused all along; Newpoli was a technically-adept group capable of stirring emotions from deep within. Comforted and emboldened by this knowledge, the group returned to the studio and their efforts were rewarded with their fourth album “Nun te vutà” (2015). The recording was less traditional and more contemporary in nature. It contained several self-penned and heartfelt compositions that dealt with current social issues such as emigration, displacement and emotional despair. “Nun te vutà,” “Sciure d’arance,” “Bazaar,” and “Pizzica de la desideri” are among the most passionate and profound songs among the 12 tracks. Just as the band was riding the wave of satisfaction and success they were stunned by the sudden death of their beloved fellow member and accordionist Roberto Cassan while visiting family in Italy and preparing for a tour in August of 2016.

Newpoli would mourn their loss and take pause to reflect on their friend and career. To honor their esteemed colleague, the group chose to plow forward and continue their musical journey. They elected to utilize the popular crowd-funding option to help raise the necessary funds to record their fifth and most recent album “Mediterraneo” (2018). Dedicating the recording to Roberto, the band displayed their most original and creative songwriting skills on the songs “Mediterraneo,” “So’ emigrant,” “Na voce sola,” and “Lagr’m’.”

Newpoli is preparing for an extensive tour in support of the recording scheduled for the Fall of 2018 through Spring of 2019. For more information you can visit their website at www.newpolimusic.com.

Tweet
More in this category: « From the Italian American Press - "Royanna: An Extraterrestrial Affair" Elena Ferrante's "My Brilliant Friend" »