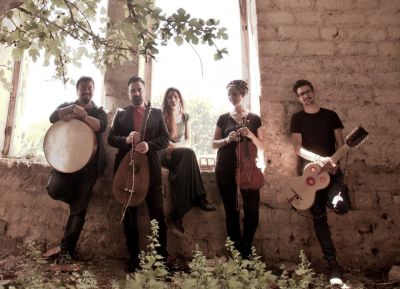 The true beauty of Italy lies in the uniqueness of the 20 diverse regions that comprise this Mediterranean Basin peninsula. The Italian unification, or Risorgimento, was the political and social movement that consolidated the different states of the Italian promontory by freeing them from foreign domination and uniting them into the single state of the Kingdom of Italy in the mid-19th century. This merging of contrasting ideological, cultural and literary ideals helped arouse the national consciousness of the newly christened “Italian” people. Though now one nation, each area or region still maintained its personal charm and distinctiveness. For many however, they see themselves as Venetians, Neapolitans, Romans, or Sicilians first, then as Italians second. This regional pride, which is evident in the areas of cuisine and language, becomes most apparent in their style of traditional music.

The Southern region of Puglia (Apulia) is noted for the Tarantella and Pizzica music genres which both feature a percussive-acoustic and up-beat tempo. One proud proponent of these melodies is the folk group Tarantula Garganica. They are from the comune of Monte Sant’Angelo which is in the eastern confines of the Gargano peninsula within the province of Foggia. They were established in 2002 with the intent to re-discover and disseminate the ancient sonorities of their birthplace through audio-visual re-interpretation using traditional acoustic instruments such as the chitarra battente (a guitar which is both strummed and beaten), tamburello (large-sized tambourine) and castagnole (castanets). The band sets to music the works of local poets, performing to ever-growing crowds in piazze and on palchi (stages) all throughout the Apulian countryside.

They eventually released their first album, “Sope a na muntagne” (2004). The recording featured lively compositions of lyrical prose known as tarantelle (tarantellas) originating from villages throughout the province. When these songs are performed live, they are accentuated by accompanying dance and choreography. Having found the perfect means to spread their cultural message and inner passions, Tarantula Garganica, returned to the studio and released their second album, “Quelle strette vie del sud” (2005). While they still payed homage to their beloved birthplace, they expanded their repertoire to now include music from the bordering region of Campania as their performances were taking them to venues beyond their native surroundings. Maintaining a frenetic pace, the group released their third album in as many years, “Chi non capisce l’amore abbastanza” (2006). This 10-song recording acknowledged and paid tribute to legendary Gargano musical artists including: Andrea Sacco, Matteo Salvatore and Matteo Giuliani. The band would enter into a period of collaborative ventures as they sought to enlarge their impressive compositional catalog while expanding their musical knowledge base. Their association with I Cantori di Monte Sant’Angelo yielded three fruitful recordings, “All’use Antiche” (2008), “’Nfanne ‘Nfanne” (2009) and a book-compact disk production entitled “Ciucquette” (2010), which paid respect to the recently deceased and beloved local vocalist Michele Totaro. During this time, Tarantula Garganica also embarked on an ambitious international tour that took them to stages in Cambridge, England, Barcelona, Vancouver, Brussels, Paris, Berlin, London, and Azore, Portugal.

The group was introduced to the burgeoning World Music collective and made many important associations and experienced success that far exceeded their original expectations. Seeking to capitalize on their newfound success, founder and leader of Tarantula Garganica, Peppe Totaro, launched a cultural initiative called “Raduno dei Suonatori di Tarantella.” This project sought to organize and promote the music and traditions of the Gargano region. They received vital support from several local groups and organizations and successfully produced a music compilation of local musical talent entitled “La Tarantella sul Gargano” (2011) and the film documentary “Suonatori di Tarantelle del Gargano” (2013), which was produced by Parco Nazionale del Gargano.

Inspired and enriched by this period of growth and reflection, Tarantula Garganica returned to the studio to resume their recording activities and put the finishing touches on their fourth album, “’Nda nu litte d’amore” (2012). Because of their polished technical skills and emerging public popularity, this 10-track recording also featured creative input from local established studio musicians and invaluable guidance by Maestro Antonio Piccininno. The album continued their predilection with promulgating the region’s treasured musical archives while introducing themselves to audiences far from their homeland. Their most recent recording, and fifth overall, “Chi nasce e chi muore – u timpe é fatte pe l’ammore” (2017) contained nine new compositions and was mastered at the prestigious Studio Uno production facilities in Gravina, located in the Metropolitan area of Bari. This album was considered their finest album to date as the group had developed a familiar yet distinct style that has been described as entertaining and listenable and is best enjoyed during live performances.

The group has re-kindled their love for touring and performing in the last few years as they have embarked on several international exhibitions that included several stops in Canada, appearances in France and, most recently, a large-scale musical presentation in Belgium. The current lineup features vocalist/guitarist Peppe Totora, vocalist/violinist Marta dell’Anno, percussionist Andrea Stuppiello, guitarist Luigi Guerra, and dancer Carmela Taronna. You can find more information about the group on Facebook.

Tweet
More in this category: « From the Italian American Press - Italian Through Food Irene Fornaciari Out From Under Familiar Shadows and Into Her Own Personal Spotlight »