Statuto - Defiantly devoted to preserving a unique and classic subculture 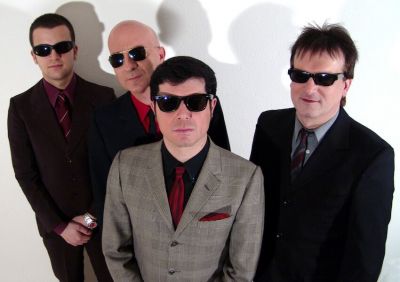 Styles are thought to be transient and impermanent while good design, on the other hand, is a language all its own which transcends style and is far more enduring. In the late fifties, a sensation known as the “Mod Culture” started in London and quickly spread throughout the European continent. Fashion, food, art, transportation, and music were all influenced by this ethos. Members of this clique were easily distinguishable by their outward appearances and mannerism. “Haute couture” clothing, mopeds and modern jazz were the most familiar features of this social group.

This trend would however lose favor with the in-crowd and eventually fade out by the late sixties. The late seventies saw a revival in the “Mod Set” and Turin, in northern Italy, became the hotbed of activities. Leading this resurgence would be the Italian “Ska” band known as Statuto. The group was established in 1983 and took their name from the famous Piazza Statuto found in the central business district in this northern Italian metropolis.

They were drawn to this unusual music style that originated in Jamaica in the late fifties and combined elements of calypso, jazz and rhythm and blues. Founding members were Oscar “oSKAr” Giammarinaro (Vocals), Giovanni “NaSKA” Deidda (Drums), Davide “Junior” Rossi (Keyboards), Alex “Bumba” Loggia (Guitar), and Mauro “Cico” Ciancone (Bass). Statuto immediately began performing live and found time to record and publish two demo tapes, “Torino beat” (1984) and “Nella città” (1985) which they peddled in hopes of obtaining a recording contract. Their persistence paid off as they caught the interest of the Turin-based D.T.K. independent music label which authorized the release of two singles “Io Dio” (1986) and “Ghetto” (1987). Due to their unique music style which featured Italian lyrics, Statuto clandestinely began cultivating a burgeoning “underground” reputation all throughout the peninsula. They next signed with the Toast music label and released their first two full-length albums, “Vacanze” (1988) and “Senza di lei” (1989). The former contained 10 tracks, including seven originals and covers of songs by Nino Ferrer and Stevie Wonder. The latter contained musical contributions from British Hammond-Organ specialist James Taylor. Tours which followed each of the releases garnered the group a cult-like following as well as the attention of the Italian division of the EMI Music Group. The Band released their first hit single “Qui non c’é il mare” and soon thereafter the label arranged the band’s appearance at the prestigious 1992 Sanremo Music Festival. Their song “Abbiamo vinto il Festival di Sanremo” reached the finals and finished in ninth place among the 18 contestants in the “Sezione Novità” (Newcomer’s Section). These two songs would find their way onto their third album “Zighedà” (1992) which displayed rhythm and blues compositions and contained the hit single “Piera,” which debuted at the 1992 Festivalbar Music competition. Good fortune and controversy followed Statuto as their fourth album “É tornato Garibaldi” (1993) was well-received by the critics and public alike and also contained the hit song “Saluti dal mare” which was featured at the 1993 Cantagiro Music Festival. The title track however, blatantly attacked the Lega Nord political party and would cause the entire album to be censured from public broadcast. This unintended publicity made it a popular collector’s item in the underground music scene and became a frequently requested song during their live performances.

Seeking a change in direction, Statuto would sign on with the Sony Music Group and upon returning to the recording studio in 1996, they would release their fifth album “Canzonissime” (1996). The recording contained original songs that borrowed their titles from previously established Italian hits. The lyrics and music however were all their own and the album had a decidedly more rock feel. Their sixth album “Tempi moderni” (1997) was recorded under the supervision of Epic Records and would yield the hit single “Non finirà.” Their seventh recording “RiSKAtto” (1998) saw them returning to their “ska” roots as the album that contained English language covers recorded in Italian. Statuto welcomed in the new millennium by releasing their eighth and ninth albums with Sony Music, “Il migliore dei mondi possibili” (2002) and “I campioni siamo noi” (2003). The first recording featured collaborations with Italian recording artists Paolo Belli and Righiera. The second album was their first greatest hits compilation with many of their classics re-recorded on their 20th anniversary. Statuto began the third decade of their career by changing labels again signing on with Venus Dischi. Their 10th release was “Sempre” (2005) a 14-track album that incorporated rocksteady and soul-flavored compositions. As always, unafraid of the consequences, their songs espoused socially conscious, opinionated and politically-charged themes. Upon their return from the road, they sought to capture the highlights of their extensive tour by releasing their 11th and first-ever live recording “Le strade di Torino” (2006), a double CD, including a re-release of their very first rare recordings as the second disk. They closed out the first decade of the new century with three distinct albums, their last with Venus; “Toro” (2006), a tribute to the city and soccer team of “Torino” (Turin); “Come pugno chiuso” (2007), a tribute to the sixties English “Northern Soul” music scene which was heavily influenced by African-American gospel and soul sonorities and “Elegantamente Rudi” (2008), their second greatest hits, containing 39 songs on a double CD set, in celebration of their 25th Anniversary. In the last decade, Statuto returned to Sony Music and released É già Domenica” (2010), one of their most diverse and popular recordings to date and “Undici” (2011), their second live album featuring the group at its very finest on stage. Their last two albums, their 17th and 18th; “Un giorno di festa” (2013) and “Amore di classe” (2016) were again ambitious productions that displayed a confident and motivated band touching upon profound social topics through various musical styles. For more information you can visit their website www.statuto.net.

Tweet
More in this category: « From the Italian American Press - My Caruso "Critical Cover-Up" »