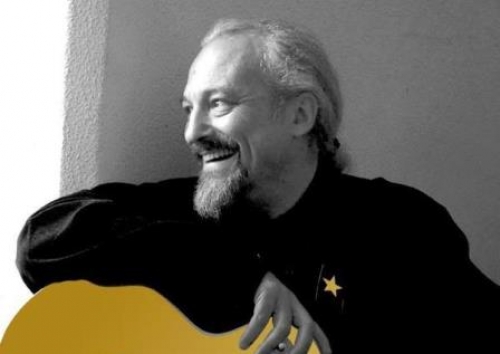 Without question, the only thing better than having strong roots in one culture is enjoying the experiences associated with exposure to multiple social environments. Italian singer/songwriter and poly-instrumentalist Eugenio Finardi, who was born in Milan on July 16, 1952, is a classic example of a person with feet firmly planted on both sides of the Atlantic. He is fluent in both Italian and English due to his Italian father, Enzo Finardi, a music sound engineer, and his American mother, Eloise Degenring, an operatic vocal instructor.

This rich artistic upbringing undoubtedly accounted for Eugenio's strong predisposition to music, and by age nine he recorded his first song "Palloncino rosso fuoco." During his formative teen years, Eugenio displayed a voracious appetite for diverse musical styles including blues and classic rock while simultaneously undergoing a period of personal development and cultural enlightenment. He launched his professional music career during the late sixties and soon met Alberto Camerini, another fledgling but talented singer/guitarist of Italian Brazilian origin. Together, they formed two relatively modest music groups "Tiger" and "Il Pacco" and began performing in clubs and venues throughout the burgeoning Milanese music scene. While honing their sound and stage skills, they were instrumental in introducing both new wave and techno-pop music styles to the Italian music scene.

In 1973, Eugenio signed a recording contract with the "Numero Uno" label, founded by Mogol and Lucio Battisti. He originally began writing his first few songs in English which passed largely unnoticed. It was only after he signed a contract with Gianni Sassi's nascent Cramps music label in 1974 that he commenced his personal renaissance. Eugenio began writing songs in Italian that espoused left-wing commentary, containing blunt and intense lyrics that resonated among the more urbane members of society. He released his debut album "Non gettate alcun oggetto dai finestrini" (1975) which featured a progressive hard-edged sound accompanied with socially-conscious lyrics. The recording even contained a remake of the 1930's protest song "Saluteremo il signor padrone" but failed to garner much attention. Eugenio's luck would change drastically, however, as his next four albums, "Sugo" (1976), "Diesel" (1977), "Blitz" (1978) and "Roccando Rollando" (1979) were released over an intense period of four consecutive years and garnered immense public notoriety and critical acclaim. His refined sound was more commercially oriented and singles such as "Musica ribelle," "La radio," "15 bambini," "Affetto," "Cuba," and "Extraterrestre" all received significant airtime. Eugenio sought an extended respite from the preceding hectic recording and touring schedule.

He terminated his association with Cramps and relocated his base from Milan to the more serene province of Como. Eugenio launched in the eighties what would become a ten-year working relationship with the established Fonit-Cetra music label. He undertook a more relaxed recording and touring approach and the results were more to his liking. The albums "Finardi" (1981), "Dal blu" (1983), "Colpi di fulmine" (1985), "Dolce Italia" (1987) and "Il vento di Elora" (1989) featured collaborations with revered contemporaries such as Lucio Dalla, Valerio Negrini, Alberto Radius, Franco Battiato, and Laura Valente.

Of particular interest during this time is that Eugenio became a father for the first time in 1982 to a daughter, Elettra, who was afflicted with Down 's syndrome. He dedicated the entire "Dal blu" recording to her and the song "Amore diverso" was written in her honor.

The mood of his songwriting over the course of this decade saw him abandon much of his earlier anxiety-driven edginess and evolve into more romantic and thoughtful themes. His musical styles expanded to include jazz, acoustical, electronic and blues compositions. Hit singles such as "Trappole," "Dolce Italia," "Amica," "Patrizia," "Le ragazze di Osaka," "Vil Coyote," and "Vorrei svegliarti" were all well-received and critically acclaimed with the latter being presented at the 1985 Sanremo Music Festival. Eugenio entered the final decade of the millennium moving to his new label WEA (Warner/Elektra/Atlantic) music conglomerate and expanding his collaborative resume by enlisting the talents of Italian stars such as Ligabue, Ivano Fossati and Rossana Casale.

His body of work now seamlessly and skillfully weaved together all the previous traits of substance with style and power with grace. Although he only released three new albums "Milennio" (1991), "Occhi" (1996) and "Accadueo" (1998) during this time, his sales and popularity reached an all-time personal high. His hit interpretation of Brazilian Chico Buarque de Hollanda's "Mulheras de Atenas" into "Le donne di Atene" reflected his growing confidence. The hit single "Amami Lara" was used in the wildly popular "Lara Croft" adventure series enterprise and was also presented by Eugenio at the 1999 Sanremo Music Festival. His translation of Joan Osborne's "One of us" into "Uno di noi" along with accompanying video touched the sentiments of the religious world with its uplifting message. Eugenio sought new challenges and addressed those with the 2001 album "O Fado" which paid vigilant and respectful homage to this antique folk-style Portuguese music genre. He experimented further with his 2005 recording "Anima Blues" which was performed completely in English and delved into his longtime passion of pure unadulterated blues. He then explored new age sonorities as he released the album "Il cantante al microfono" (2008) which paid honor to the musical works of Russian actor, poet, activist and guitarist Vladimir Vysockij. Eugenio interpreted the Russian lyrics into Italian and was backed by the "Sentieri Selvaggi" contemporary musical group.

In 2009 he participated in the "Artisti Uniti per l'Abruzzo" recording of "Domani 21.04.2009" which sought to raise funds and awareness for the victims of the April 6, 2009 earthquake that ravaged the region of Abruzzo. Eugenio published his first literary work in January of 2011 as he wrote "Spostare l'orizzonte - come sopravvivere a 40 anni di Rock," a book which expressed his philosophies of life. After a period of repose, vacationing with the family and mourning the loss of his mother in October of 2013, Eugenio returned to the studio in 2014 and released his eighteenth studio album of new material entitled "Fibrillante." This seventies-style recording features Eugenio coming full-circle and returning to his rock roots. He collaborated with members of the Italian rock bands "Afterhours," "Perturbazione," "Area," and "Premiata Forneria Marconi."

He is currently in the midst of a continental European tour in support of this release. For more information you can visit his website at www.eugeniofinardi.it.