Castaldo is enjoying the fruits of his labor 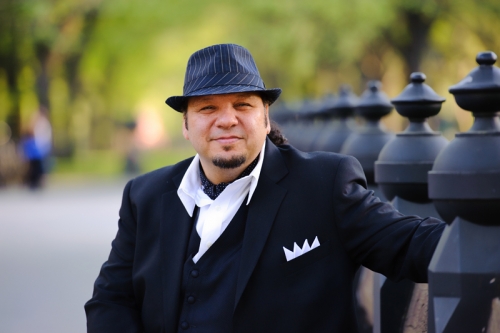 The nearly twenty-year professional music recording career of michéal CASTALDO is a classic example of how art imitates life. It strikes me as having been a process not unlike the life cycle of the native Calabrian bergamot citrus fruit. Each requires meticulous care and attention, but with the right combination of time, temperature, sun and soil, the end result yields a succulent delicacy that is often imitated but rarely duplicated.

The first part of the cycle is the careful selection of the right seedlings. Castaldo's initial efforts can be likened to this as the music reflected his tastes and experiences of that time. "Only Human" (1994) and "Gioia2" (2002) were recordings that displayed the depth and breadth of his lyrical and musical creativity. Careful attention to detail went into the selection of the diverse arrangements included in these albums. Only the very best compositions, such as "Glimpse of Heaven" "Rio" and " Waitin' for You" were included and this would bode well for what was next to come.

The next step in the cycle involves the planting and the choice of location crucial to the survival of the fruit as an imprecise estimate can spell disaster to the best of intentions. "Villa" (2004) and "La dolce vita 'nAmerica" (2007) reflected the careful attention to the important process of laying strong roots for success as Castaldo's lineage and intense devotion to his native soil confirmed his wise decision to pay homage to the most beautiful of all languages, Italian. His audience would delight in the strains of "Caruso," "Con te partirò," "Nessun dorma" and "Il tuo mondo". These releases also include a prime selection of Neapolitan "evergreens" such as "'O Sole Mio," "Core 'ngrato" and "Vierno" along with a sprinkling of popular adult contemporary classics such as "E tu," "Notte di luce" and "Questo piccolo grande amore."

The third step in the cycle is the cultivating of the saplings as attentive pruning and careful fertilizing, will contribute to the likelihood of a bountiful harvest. "Aceto" (2010), "Extravergine" (2011) and "Olive You" (2012) exhibit Castaldo at his finest as his "personal cultivation" features a collection of songs that unleashes the entire gamut of emotions, expressing his emphatic joys on through to his most somber sorrows. "Pray'r," "Io credo," "Questo e amore," "Lui vive in te" and "Tutto é bianco nel cuor'" are carefully interspersed among a dazzling array of Italian-adapted American classics such as "Senza catene" (Unchained Melody), "Pregherò" (Stand by Me), "Tua immagine" (Sound of Silence), "Amici miei" (Amazing Grace) and "Brucia la terra" (the Godfather theme).

The last step in this arduous process is the final harvesting of the carefully tended fruit, usually performed by hand and with careful scrutiny to ensure only the very best are chosen. With his new recording "Bergamot" (2013), Castaldo is now reaping what he has carefully sown. There is no mistaking a pungent Calabrian bergamot fruit or tree-ripened olive as there is no mistaking the "New Voice" of contemporary Calabrian-language song and story. "Bergamot" is Castaldo's "capolavoro" and genuinely reflects who and what he is and in doing so tells the tale of this magnificent region of the Italian peninsula. The album proudly proclaims its historically-rich Greco-Iberian pedigree in the Calabrian language. The influences of the flamenco guitar, Mediterranean sonorities and Middle-Eastern rhythms find their way through the wide variety of compositions, both original and covers, new and old. All of them bear the trademark Castaldo sound which is now becoming captivating and infectious. "Riu," "Spetu pe tia" and "Travedu u paradisu" have returned and are more spectacular than ever before. An eclectic cornucopia of other songs included adaptations of popular American hits such as "Senti a Musica" (Listen to the Music), "Senza amuri" (Without love where would you be now) and "Hotel California" bring Castaldo back to his early rock and roll roots but in a way never before imagined.

Creatively, artistically and professionally, he has come completely full-circle and created a tapestry of all that he has hoped to achieve and has positioned himself to become to Calabria what Nino D'Angelo has become to Campania. Their proud native son and international ambassador who will spread the little-known and vastly underappreciated warmth and charm of this distinct art-form to new heights to both old and new adoring fans across the globe.

Castaldo will be appearing at the Greater Youngstown Italian Festival on August 3rd and 4th.

Tweet
More in this category: « Pronti? It's Festival Season Elisa »