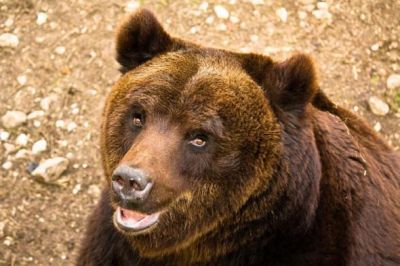 Last summer I tracked down a Marsican Brown Bear, one of the rarest species of bears in the world. They are located only in the Abruzzo National Park (Parco Nazionale d'Abruzzo, Italy) and there are around 40-60 of them left. It took a long time and a lot of preparation to find this bear.
I spoke with my uncle before the day of the hike and he told me many things about the bear and the park itself. Turns out, the bears are starting to become harder to spot as their movements are sporadic. This sporadic movement was caused by the Apennine Wolf, a new species that was recently introduced to the Parco Nationale d’Abruzzo. Why was it introduced, I hear you ask? Well, the species of boar in the park was not normal, it was actually a crossbreed between a farm pig and a boar. The boars in the park reproduce three times faster than normal. The WWF (World Wildlife Fund) introduced this new wolf species to control the population of boar. The only problem is that the bear does not interact well with this wolf and proactively avoids it. This causes more sporadic movements throughout the park, thus making the bears harder to track.
As previously stated, the Marsican Brown Bear is located only in the Abruzzo National Park. So, for starters, my family and I needed to drive there. This was no easy task. It took around two-and-a-half hours of driving on rocky roads and dirt path trails to arrive in a small city named Pescasseroli, which was inside the national park. Before entering the park, the guide who was assigned to us informed us that there was absolutely zero bear activity in the two weeks prior to our arrival. This meant that, at the time, the chances of finding one was very low. The bear is a relatively friendly species, although it does not like to be around humans and can smell them from a distance of up to two kilometers. This lowered our chances of finding one even further.
After entering the park, we started to find tracks and opened nuts scattered across the trail. We also found fresh droppings and recently dug holes. We hiked for around five hours, reaching one of the highest ridges of the mountain range. We stopped for around an hour-and-a-half and this is when we saw the bear. It was off in the distance, yet you could see how large the animal actually was. The bear stuck around for almost five minutes before it ran off into the forest, out of our sight. And just like that, the magnificent creature was gone. Yet its presence remained around us the entire journey back.
The hiking was not finished, though. After having an abundance of lasagna and sausages in a small cottage at the peak of the mountain, our guide led us into the dark unknown night to locate our cars which were parked at the bottom of the mountain range. We were in the pitch-black forest with our phones being our only source of light. Bugs swarmed our flashlights and boars and wolves howled all around us, yet we made it back to our cars and drove home safe and sound.
This was a magical experience and seeing the bear quenched the great thirst I had for adventure for a little while. Now, every time someone mentions the bear, I remember the surreal experience I had this summer.

Tweet
More in this category: « Via Francigena and European Freedom of Movement The Glittering Interior of the Basilica di Santa Prassede »