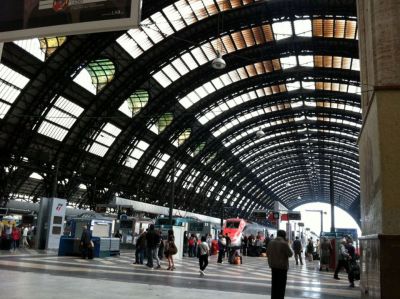 If you have traveled to Italy, I’m sure you are already familiar with the usual travel tips in the guidebooks such as:

The list can go on and on and most of us are smart enough to follow these basic travel suggestions for overseas trips. Having the good fortune to consider myself a seasoned traveler to bella Italia (10 times in the past 12 years), I learn something new each time I go. Here are a few stories from my personal, and sometimes embarrassing, situations. I hope you find these helpful and maybe even humorous.

All travelers to Rome beware near the Termini station for the taxi scam artists. In one of my early trips, I was naïve enough to fall for a typical scam. An Italian man approached my friend and I and told us to follow him to his taxi, despite the line of official taxis in front of the station. He quoted a price of 40 euros to our hotel; we agreed and followed him. He grabbed our luggage and walked across traffic and down a side street. I knew something was not right, but was taken off guard and still didn’t realize he was not an official taxi driver. Eventually we arrived at a corner where another man was waiting in the “taxi” and the first man got into the passenger seat. As I write this, I can’t believe how stupid this sounds today.

Although I had given him the hotel address, after about five minutes of driving the two men began to argue and must have realized that the address was farther than they thought. He now informed us that the price will be 67 euros because the location was at least 30 km away. It was now clear that these men were not official taxi drivers. And I knew I needed to do something to defuse the situation. I confronted them, stood my ground and spoke in Italian and English telling them that we had an agreement and that all I was paying was 40 euros, or quaranta and I said basta, which means enough. The driver said OK and let the other man out and drove us to our hotel. This could have turned out so much worse, so I consider myself lucky.

When purchasing gifts to bring home, remember the airline luggage weight restrictions. On another trip, I was flying within Italy on one of the low-cost, no-frill budget airlines. I remember thinking what a deal it was, but the airline makes up for its low cost by nickel and diming its passengers. Oftentimes, strict weight limits apply to carry-on bags as well as checked bags. If the weight exceeds the posted limits, the charge can be more than the flight. That is exactly what happened to me when I had made-in-Italy ceramics in my carryon bag. I can’t believe I had to pay an additional 105 euros. You can be sure I learned from that experience.

Don’t plan a busy agenda on travel days. Overseas travel is tiring and most flights from the U.S. arrive in Italy in the morning - Italian time. After traveling all night on a nine-hour flight (or more), the stress of making a timed event can be overwhelming. After landing in Italy, it may be the middle of the night for Americans, but now you’re on Italy time. While I find it’s best to stay up and keep moving, I don’t advise planning a timed excursion, because anything can happen and invariably, it does. I made this mistake once, and due to delays at baggage claim and the train station, I was totally stressed out by the time I arrived in Milan at Santa Maria delle Grazie, the church which contains the mural of The Last Supper by Leonardo da Vinci. Because of the rush and the stress, I couldn’t fully appreciate this opportunity as much as I would have liked. This won’t happen again, I can promise you.

So yes, I’ve made mistakes while traveling and now I’m sharing these travel tips based on real experiences. I hope your next trip goes smoothly and you don’t make these same mistakes.