My Trip to Castel di Sangro 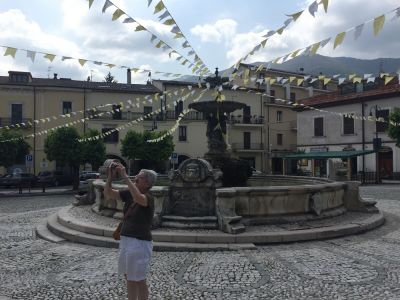 My Trip to Castel di Sangro

From June 13-27, our son, Dominic, and I toured Italy & Slovenia. Although many places were beautiful beyond words, the place dearest to my heart was the birthplace of my maternal grandparents, Castel di Sangro.

CDS is a small town of approximately 6,461 people, located in the L’Aquila province, nested in central Italy in the Abruzzi region. The town’s elevation is 2, 641 ft. CDS is a 2.5 hour drive from Rome International Airport. It is famous for its skiing in the wintertime and greatly depends upon the summer and winter tourism to help supplement the town’s income.

The Sangro River, from which the town received its name, was known in ancient times as “Sangrus,” from the Greek, “Sangros.” It rises in the middle of Abruzzo National Park near Pescasserole in the Apennine Mountains. The river flows northeast into Castel di Sangro, then again northeast, joining the Aventino River before reaching the Adriatic Sea.

CDS has an Italian dialect of its own so some of the words I used in conversation with the Italians were foreign to them.

There’s a museum of some of the history of CDS in the town. Dominic and I were honored to have been given so much history about our proud heritage.

For the most part, there isn’t any air conditioning in the town, but the mountain breezes keep everything cool. We seemed to have come at an ideal time because the temperatures were always in the 70s.

We stayed at Il Lavatorio (The Wash House) which was air conditioned. It’s an ancient Roman wash house that was re-discovered. Many of the artifacts as well as the huge giant tunnel-like marble wash and rinse basins are in the hotel’s lobby. Historically, women would come to the wash house and spend all day rubbing the dirty clothes with ash and homemade soap on the sides of one of the marble basins, then taking the clothes to the other basin, where water flowed through, to rinse off the soap. This was an all-day process so the women had lots of time to talk with each other as they worked.

CDS is the ancestral home of the third and last line of The House of Caesar (Catulus Caesar).

In CDS, as well as in other parts of Italy, two kinds of salads are offered: insalata verde (salad with mixed greens, no tomatoes, etc.) and insalata mista (salad greens w/tomatoes, red onion, garbanzo beans, kernels of corn, shaved carrots, and perhaps cucumbers.) Cruet bottles of olive oil and balsamic vinegar are placed on the table for customers to “dress” their salads.

Glasses of water aren’t automatically served in Italy and Slovenia when one dines. Perhaps this is common in other parts of Europe as well to conserve on water. One has to ask for a half or one liter bottle of either "frizzy/sparkling” or plain water. We always ordered water a limona, water with a slice of lemon.

There are approximately 6 churches and basilicas in CDS.
We stayed in the Tuscan town of Montepulciano for three days. It’s famous for its wines because of the town’s ideal growing climate. I discovered that one of my favorite wines has its beginnings in Montepulciano and then the plants are taken to Castel di Sangro to complete the growing process.

The Orlando Baking Company began in CDS. Although no longer owned by the Orlando family, the bakery continues to serve the people of Castel di Sangro. The store is very tiny but offers a variety of breads, pizza and cookies. The shelves empty quickly so one has to shop early in the day.

When we arrived in Castel di Sangro, Dominic took me to Corso Vittorio Emanuele, 84. It’s the location where my grandparents, Pietro and Belandina Sfirri (Sferro), lived. The original building has been torn down but it was a very emotional experience for me to stand on the location where they lived. I wore my grandmother’s 113-year-old wedding band. As I gently rubbed it on the rough cemented wall of the dwelling, I couldn’t help but feel immensely and instantaneously connected to my sacred roots.

View the embedded image gallery online at:
https://www.lagazzettaitaliana.com/travel/8165-my-trip-to-castel-di-sangro#sigProId2259da5094
Tweet
More in this category: « A Scholarship to Study in Italy in honor of Stuart Ross Dan Brown’s "Inferno:" Following Langdon’s Footsteps through Florence »