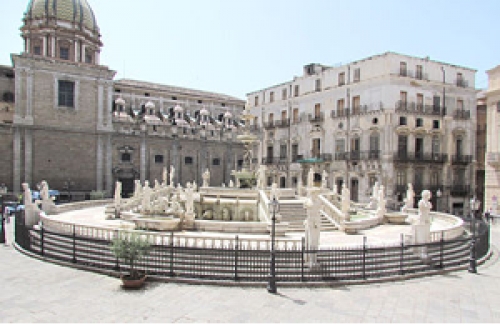 On the vast coastline of Sicily, the setting of Palermo is a mix of Asian and European architecture ranging in style from Arabic to Norman to baroque and Art Nouveau. Not too distant from the center of this historic city is the Piazza Pretoria, also known as the “square of shame.”

History reveals that nearly 450 years ago, the Palermo Senate made a deal to buy a fountain that was intended for the Palace of San Clemente in Florence. In order to make way for the fountain, several homes were demolished and the fountain and other pieces were erected in a town square. By 1581, the large central fountain was in working condition. Sixteen nude statues of humans, mermaids and nymphs were the focal point. The statues were said to symbolize corrupt municipalities thus giving the square the names Piazza della vergogna (square of shame) and the Square of the Embarrassed Statues.

Three of the four sides of the square are enclosed by buildings: the 14th century town hall, the late 16th century Church of St. Catherine and two palaces - Palace Bonocore and Bordonaro Palace. A staircase complements the fourth side of the square.