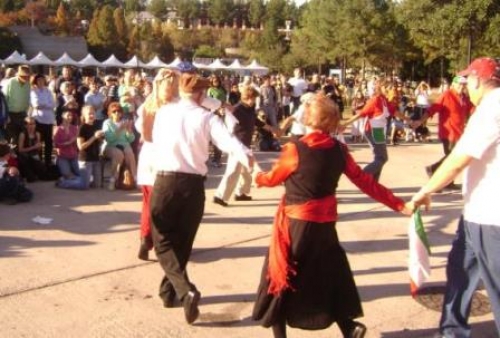 When we think of Italian folk dancing, we often think of the tarantella. This is the most popular of all Italian folk dances, probably because it originated in Southern Italy, and approximately 80% of the Italians who immigrated to America during the late 19th and early 20th centuries came from that region. But, Italian folk dancing is as broad and varied as Italy itself. Each province and even each town has its own specific dances that tell stories or give praise and thanks to higher powers. Some of the dances are ancient, dating back to as early as 200 B.C.

Folk dancing is just that, done by ordinary "folk" who have no professional dance training. The dances are often performed during celebrations, feast days, and informal family gatherings. Many of the dances and the music to accompany them were not recorded in any way. The movements and steps are passed on from person to person, generation to generation, through the simple act of watching. But, as time and the older generations have passed, less and less people are performing the dances, so less and less are learning them.

There is one organization working diligently to keep the tradition of Italian folk dancing alive and well. It is the Allegro Dance Company in Wheeling, West Virginia. The Company's founder and director, Anna Pishner Harsh, is an Italian American who started formal dance training when she was four. Since dancing was always a part of family celebrations and get-togethers, she decided to explore Italian folk dancing in more depth as a part of her college studies. She found information about the dances by attending workshops and talking with the authors of the few books written about them. Anna developed a passion for these dances and brought friends together to practice them in her parent's backyard. This casual group soon developed into the company.

The Allegro Dance Company performs a wide variety of traditional Italian folk dances at festivals and events around the country. They even made a stop in Cleveland, Ohio a number of years ago to perform at the Italian American Festival at the Berea Fairgrounds. In 2010, Anna traveled to Italy to study the dance culture and broaden the company's repertoire. In addition to tarantellas, the group also performs a whip dance originating in Sicily and the giga emiliana, a dance from Northern Italy with French influence that is characterized by a strong posture and reserved movements.

Besides preserving the Italian folk dance tradition through teaching and performing, Anna has initiated a project to preserve it on film. She has been working on a documentary, "La Danza: Bridging Time Through Dance," to be released in the summer of 2015. This will include scenes of her visits with dancers in Italy as well as examples of a number of different dances. Anna hopes that the documentary will have a far reach so others can learn about and appreciate Italian culture through dance for many generations to come. For more information about Allegro Dance Company, visit www.allegrodance.net

Tweet
More in this category: « The unbeatable experience of soccer in Italy Rome Candidate to host the 2024 Olympic Games »