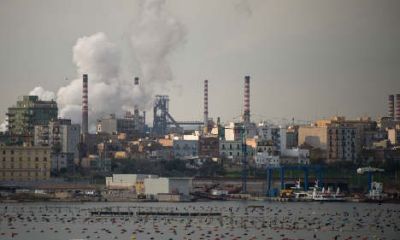 In ancient times, the city of Taranto, Italy was founded as a Greek colony, established by the Spartans. The ancient city was situated on a peninsula and the modern city was built directly on top of it. In fact, part of the city wall is ruins from ancient Taranto. The city is also the origin of the common name of the Tarantula spider family.

Historically, residents of the town of Taranto who were bitten by the large, local Wolf Spider would promptly do a long vigorous dance to sweat out the venom of the spider (although the spider’s venom was not deadly to humans). The frenetic dance became known as the tarantella. Unfortunately, these interesting facts about the city of Taranto are darkly overshadowed by its new role in the world – as the most polluted city in Italy and in western Europe. Seven percent of Taranto’s pollution is produced by the public. The remaining 93 percent is produced by local factories, namely the Ilva steel plant.

In 2005, the European Pollutant Emission Register estimated that the Ilva plant was responsible for 83 percent of Italy’s total reported emissions. Alarming cancer rates are associated with the population of Taranto with cancer of the lungs or bronchus being the most common. The rate of cancer among children in Taranto is 30 percent higher than the national average. As well as the elevated risk of tumors, children under 14 living close to the polluting Ilva plant are three times more likely than their peers to suffer from asthma or respiratory problems. This data is courtesy of a September 2016 Airtum report (the Italian Association of Cancer Registries).

In 2013, the Riva family who ran Ilva’s Taranto site was accused of fraud and failing to prevent toxic emissions including carcinogenic particles from spewing out across the town of Taranto. The site was placed under special administration by the Italian government. In early 2014, Ilva’s Taranto site was nationalized with the government taking full control of the plant. The government’s plan was to sell the heavily indebted company within the following three years.

In May 2017, Adriano Riva was sentenced to two and half years in jail after transferring 1.3 billion euros he and his family siphoned off from the company between 2009 and 2013. The family admitted to having saved the money by delaying work to bring the steel plant into compliance with safety and environmental requirements and agreed to restitute the funds to help clean up the facility and keep in running.

In January 2016, the Italian state opened bidding for the polluting steel giant. Would-be buyers would have one month to submit offers, individually or in an alliance. Any deal had to ensure production would continue, jobs were largely protected and environmental rules were respected. In June of this year, a consortium led by global steel giant, ArcelorMittal was chosen to take over the struggling plant. Economic development minister Carlo Calenda said in a statement that the offer was worth 1.8 billion euros. The Taranto site currently employs 11,000 people and is still at the center of a huge legal case in which experts cited by prosecutors have charged that 11,550 people have died from toxic emissions in seven years.

Lakshmi N. Mittal, chairman and CEO of ArcelorMittal, said: “I am very pleased that AM Investco, our consortium together with Marcegaglia and Banca Intesa Sanpaolo, has been recognized as a good owner for Ilva. I would like to take this opportunity to assure all stakeholders that we recognize the trust that has been placed in us.  We will work with all interested parties to ensure a stronger, better and cleaner future for Ilva, its employees and the regions in which it operates.

Tweet
More in this category: « Italians Are Taking Unemployment Into Their Own Hands Basilica di San Francesco: A Sublime Set for Sublime Music »