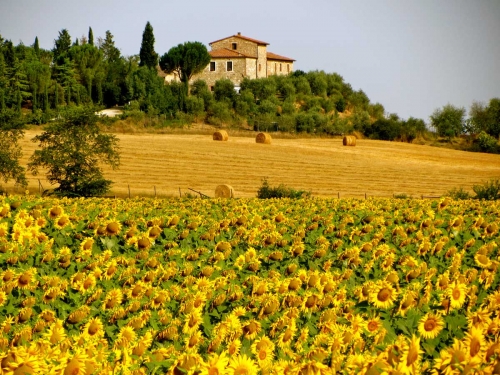 Since the 18th century, sunflowers have bloomed in Tuscany. Exotic to North America, the plant was taken to the European continent by Spanish explorers sometime around 1500, becoming widespread throughout present-day Western Europe mainly as an ornamental, but some medicinal uses were developed. Although commercialization of the plant took place in Russia in the 18th century, it easily found its way all over Europe, including Italy. By 1716, an English patent was granted for squeezing oil from sunflower seed and today sunflowers are grown as a commercial crop for their tasty oil.

Sunflowers exhibit “heliotropism” which is the ability to grow in the direction of the sun. At sunrise, the faces of most sunflowers are turned towards the east. Over the course of the day, they follow the direction of the sun from east to west, while at night they return to an eastward orientation. For this reason, sunflowers go by the name of “Girasole” (Sunturner) in Italian. Typically, Tuscan sunflowers reach peak bloom in the middle of July, depending on the growing season’s weather conditions.

It’s no wonder why visitors from all over the world travel to Italy for scenic drives and bike rides through the Tuscan countryside to view the endless sunflower fields.